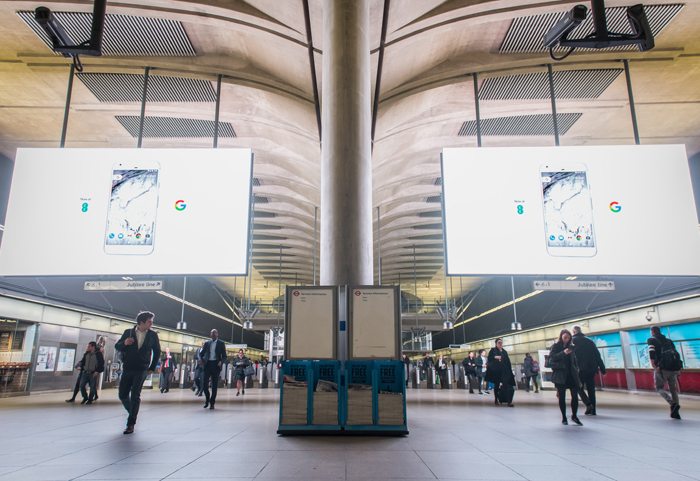 Share via
In March 2016, Transport for London (TfL) picked Exterion Media as its media partner for what it called the ?world?s largest outdoor advertising contract?. The numbers speak for themselves. An average advertising engagement dwell time of three minutes on the platform and 13 inside a carriage is supported by the finding that London Underground users are six times more likely to recall an advert seen there. Some 79 per cent have looked up something or purchased a product as a result, with the advent of WiFi on platforms seeing a quarter search advertisements online. With 3.5m million passenger journeys a day, London Underground provides businesses with a wide range of advertising opportunities. Then there is bus advertising, with 2.3bn journeys made on those each year. Exterion Media has a contract controlling advertising space across London Underground and Overground, Tramline, Docklands Light Railway, Victoria Coach Station and the soon to be operational Elizabeth line. To find out more, Real Business sat down with Exterion Media research manager Nicola Barrett and group development director Jason Cotterrell to see what the options are and how it can translate into a boost in sales. Whether it is young businesses looking to launch a new brand and build levels of awareness, or more established companies maintaining public visibility, Cotterrell believes TfL provides an option for a wide range of marketing requirements. He was keen to emphasise the feeling amongst commuters that advertising seen on TfL is not viewed as an ?interruption? ? rather a medium that people are happy to engage with as a distraction. ?People are tailoring campaigns to different audiences,? he added. ?They all have different lives of costs, but the point is that it is possible to tailor a campaign across our assets using anything from ?10,000 to ?250,000.? The scale of TfL advertising is shown well through the new digital screens that have been installed at Canary Wharf station. Generating 1.52m impacts/views a week, they capitalise on the 2.1m monthly passenger journeys that are made through the station. Knowing the London Underground environment like we do allows us to help tailor campaigns,? Barrett added. ?There are huge cross-track platform ads, which are great, but are assets maybe smaller brands can?t afford. For those, there are corridor panels?? which people really engage with them. ?These might might not have same dwell time, but really do offer new brands cost-effective ways of getting out there.? Both Barrett and Cotterrell did acknowledge that out of home advertising like that found on TfL is harder to measure than conventional digital advertising, but what can be guaranteed is the calibre of potential customer being put in front of messages. Figures from Target Group Index and the Office for National Statistics have shown that London workers earn 53 per cent more than the national average per year, and 74 per cent of London Underground users are ABC1 ? the highest three social grades. Furthermore, over 50 per cent are aged 18-34 and 37 per cent are likely to be ?opinion leaders and conversation catalysts?. So what are the drawbacks? As Lopo Champalimaud, founder and CEO of beauty marketplace Treatwell, explained in our complimentary case study-based feature: ?A small spurt of activity will not move mountains ? you need to be willing to commit to a longer period of activity.? Additionally, it is a competitive space for young brands to be marketing in. While we found that Treatwell, Urban Massage, Campaign Monitor, carwow and CV-Library are gaining traction through advertising across TfL, each are going up against globally-recognisable brands such as Coca-Cola, MasterCard, Google and Facebook. Carwow?s James Hind made an interesting comment when he said: ?If you try to communicate everything in one execution, you can end up communicating nothing.? Instead, he recommends using data and learnings from customers and prospective audience to focus the message on the things that have most impact. Then it?s about keeping the creative simple, impactful and clear. Both TfL and Exterion Media have big plans to innovate further in the future. While the majority of ad placements across our commuting network remain paper-based, it?s fair to say that there will be a considerable shift towards digital in the coming years. Digital display boards allow media buyers to be even more focussed, perhaps targeting a particular time of day or school run rush. ?We will be looking at environments where we can dominate with huge, large-format digital screens,? Cotterrell revealed. ?By reducing the amount of sites to improve station ambiance, we?ll be making it more of an enjoyable experience and in keeping with architecture.? For any business considering advertising across TfL, Cotterrell had some simple advice. Make sure you know exactly who your key audiences are and what your budget is. Beyond that, identify need and challenges to make sure advertising in this format produces results. Discover why?five businesses we spoke with are fans of London Underground advertising.