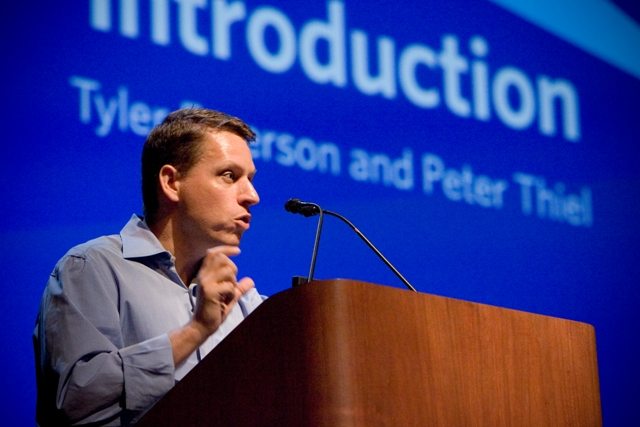 Don’t get him wrong – Peter Thiel isn’t single-handedly trying to wipe-out the prospects of a generation of school children, he’s is trying to find the next Big Idea.

Through his Thiel Foundation, Peter Thiel, the president of hedge fund Clarium Capital, will make 20 grants of as much as $100,000 each to teenagers who have promising ideas for technology businesses. This is where true disruption comes from, Thiel told the audience at the TechCrunch Disrupt conference yesterday in San Francisco. “We need to encourage young Americans to take more risks,” Peter Thiel said. His grants will also help solve another problem faced by many young people – crippling debt. Because going to university is more expensive than ever, Peter Thiel noted that a lot of kids come out of school having to worry about debt rather than just focusing on doing great things. He hopes to change that: “While they’re able to get certain types of jobs with traditional education, the problem is they can’t actually do anything that pays less in the short term and may have more value in the long run.” Peter Thiel has a strong enough pedigree to pull this off – not only does he run a big hedge fund and VC fund (Founders Fund), but he was also the co-founder of PayPal and was one of Facebook’s first investors. He’ll be accepting applications for his grants through the end of the year, for enrolment in 2011. Young entrepreneurs, this is your chance.