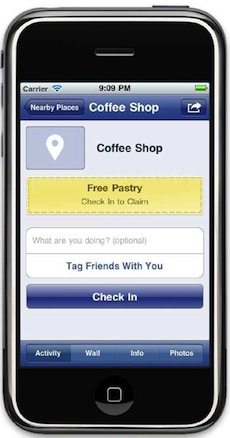 Facebook Deals allows retailers to see when someone checks into their shop, café or restaurant, and offer them promotions and special offers through location-based advertising.

Groupon, Google, Foursquare and SCVNGR should all start quaking in their boots. Starbucks, Yo! Sushi, Mazda, Argos and Benetton are among companies already signed up to Facebook Deals in the UK. Debenhams will be giving 10,000 people who check into one of their stores a free makeover and some Benefit mascara. Eventually, Facebook will work to attract small, local businesses too. “When brands put people at the centre of their marketing efforts, they get results, and consumers get value from that,” comments Facebook’s European vice president Joanna Shields (ex-Bebo, ex-AOL, ex-Shine). Facebook Deals has the potential to make “big waves” in the mobile-voucher space, according to digital expert Guy Levine. “Like many other savvy companies, Facebook is investing in its user base,” says Levine, the CEO of Return On Digital. “Facebook Deals is social in its nature; as your friends watch you check in, they’ll start checking in as well.” While not mature yet, Facebook has the first version of its advertising platform in place, making it easy for retailers to add their marketing. Facebook doesn’t take a cut of proceeds or charge users just yet. But what it does do is encourage users to explore its mobile app and boost usage (as most check-ins happen through mobile phones). According to Shields, users on the mobile app already share five times more information than users on the web. “For the digital native, this is a dream come true,” says Levine. “If you’re going to buy a coffee, why not buy from a coffee shop which is offering a deal? For the retailer, it is a cheap way to advertise to hyper-relevant potential new clients.” To see how Facebook Places works, check out the video below.