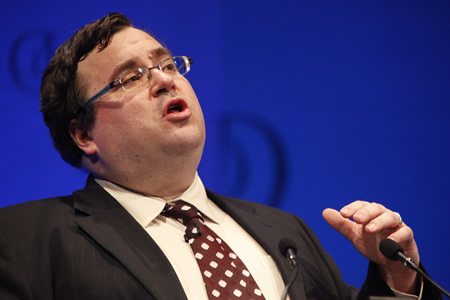 Reid Hoffman, co-founder of LinkedIn and a significant investor in Facebook, confirmed the move in an interview with The Sunday Telegraph.

?I suspect that Mark [Zuckerberg] will choose to go public because the company has to put in a lot of financial work in order to make the necessary filings and so he might as well make sure he benefits employees and ultimately the company from the level of work that?s already involved,? said Hoffman, who also has stakes in Zynga and Groupon. He continued: ?Going public would benefit Facebook in lots of ways ? namely having public currency to do acquisitions. So Mark [Zuckerberg] might as well get the benefit as well as the cost. Given that logic, I would suspect that some time in first half of next year, he will engage in the IPO process.? Facebook has until the end of April next year to either make the necessary filings or IPO. Rumours are flying that Facebook could set its valuation at $100bn. This would make it the biggest consumer technology public offering ever. ?Facebook has deferred for a long time,” said Reid, who floated LinkedIn on the New York Stock Exchange in May this year. “The pattern ten years ago was to go out [float] as soon as you could. The pattern now is to build a lot of inertia in your business and Facebook has done that. This will lead to a high tension IPO with a robust valuation.? Facebook, meanwhile, is keeping schtum. “There is no doubt that Facebook will be under pressure to IPO from many fronts including the SEC and its investors, who have a great deal of latent upside currently locked in. An IPO will allow part liquidation and realisation of their investment. Who wouldn?t want Facebook stock?” comments Rob Wilmot, a former co-director of Freeserve and a technology investor.

“Who knows if the speculated $100bn valuation is correct? What is obvious though is that Facebook owns its own space,” he adds. “I?ve seen a surge in the use of Facebook by friends and family who I never thought would join in. All life is here. Meanwhile, Facebook’s advertising platform is becoming a viable addition ? and sometimes alternative ? to Google in the eyes of agencies and advertisers, so revenues will only continue to grow.”

Looking back as a veteran (and survivor) of the last dotcom boom, Wilmot adds his view on the current inflated price-to-earnings ratios. “The ratios are a lot less ridiculous this time around, so I don?t think we?re going to see a spectacular bubble burst like in 1999-2000,” he says. “When Facebook floats, expect to see a deluge of IPOs as many more companies decided to cash in. I predict another dotcom gold rush.”