The study, conducted by Global Lingo, polled a total of 2,378 employees aged 18 and over working across a wide range of industries throughout the UK.

Individuals were asked if they were ever required to take meeting notes as part of their role in their current workplace. Some 62 per cent said that they did take notes at work, with 54 per cent of these workers stating that they are asked to take notes on at least a weekly basis. Of all workers who claimed to take notes, a shocking 90 per cent claimed that they ‘regularly’ took notes either poorly or incorrectly.

All participants who took notes were then asked to disclose how much time in a typical working week they took deciphering or counteracting poorly or incorrectly taken notes. According to the results, the average amount of time taken per week, per employee, was revealed to be 32 minutes, or 24.7 hours per working year.

Taking this, as well as the median hourly UK wage (£11.21) into account, the average employee questioned therefore wastes a total of £276.88 worth of their employer’s time during an average year making up for not taking sufficient notes. When then taking into consideration that 62 per cent of the current number of full-time employees in the UK (21,702,900) claim to take notes at work, it can be estimated that employees failing to take notes correctly costs UK employers altogether £3,725,641,350 per year.

Participants were then asked to disclose the most common note-taking mistakes or repercussions experienced by themselves or colleagues that they believe cost them the most time when deciphering notes. The top five note-taking faux pas emerged as follows:

Intent marketing, the latest word on many a marketers’ lips – but what exactly is it? 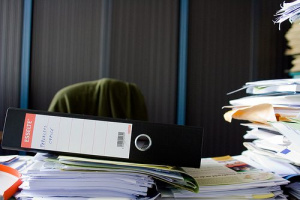 Only 1% of EU businesses achieve a paperless office