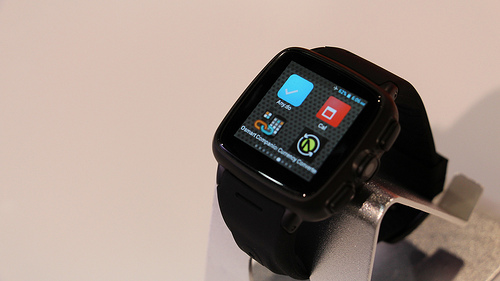 The wearable tech sphere is not just reserved for toys or gadgets and recent developments in the medical industry have shown that the possible advances of wearable tech in medical devices, such as clothing incorporating sensory devices, are seemingly endless. Wearable tech is where the money is heading by all accounts, with Apples appointment of Burberrys CEO highlighting the new fusion of fashion with technology, and Credit Suisse predicting the market will be valued at a cool 32bn in just five years.

The fundamental job of clothes has become highly competitive ground for scientists with functionality becoming increasingly as important as style when it comes to developing new products. In Europe we can already buy jackets that produce electricity to listen to built-in MP3 players, and a Canadian University is working on a project dubbed Karma Chameleon where clothes will adapt colour and shape depending on the wearers movement. Meanwhile in Madrid, scientists from the University of Carlos III have invented a T-shirt that watches the health of its owner. Electrodes have been integrated into the fabric which react to heartbeat, body temperature and level of physical activity and yes, even with all the technology embedded in its core, the T-shirt can still be washed.

This design concept uses organic fabrics with electronic paper sewn into them containing semi-conductors to display your mood through signs and colours. That’s not all though: the e-paper allows surfaces to shift into any image or video that you want, so if someone asks you for directions, you could, theoretically, project a map on to your jacket. Whether this particular product will retail is another matter, but it does reveal the fantastic possibilities.

New minimalist creations from Nike and Fitbit track a whole range of sporting activity, the former via a sports-tested accelerometer. This enables you to set fitness goals and challenges you to compete with friends, while all your activity history links up to your smartphone via the Nike+ FuelBand app, or Bluetooth 4.0 for the Fitbit. Naturally, both double as watches.

Sonys wireless headset is now available for pre-order in the US, offering a 3D visual and surround-sound experience compatible with most other devices. The jury is still out on portability, so while it has a built-in three-hour battery life, it remains to be seen whether this kit will be spotted on city commuters any time soon. The Peregrine promises control of your game with the touch of a finger, quite literally. No need to look down or fumble around for keys the game is now part of you. Designed to liberate the entire experience with over 30 unique response actions installed, custom actions can also be added to this portfolio.

Googles smart glasses have already hit the catwalk in New York, to great acclaim. This designer accessory responds to gestures, motion or voice commands to snap pictures, record videos and respond to digital queries as easily as blinking. Nearing artificial intelligence territory, the headpieces will hit the shelves in 2014 and are described as an innovative hands-free smartphone substitute. Interestingly in contrast; the Google Glass skydiving video posted on YouTube has also generated much hype, particularly with its application to record extreme sports its USP is its facility to take photographs and videos at a seconds notice.

Rumoured to be currently in development by 100 top Apple wizards, details on the iWatch have yet to emerge to the waiting market, and many are hoping for the wow-factor. However, the multi-purpose nature of such a device is sure to challenge even Apple in terms of design technology perhaps this is why it is still under wraps. Another standout in the smartwatch market is the Hyetis Crossbow hailed as the first and only Swiss-made smartwatch . The limited edition Dark Knight model is a highly desirable design in an exclusive range all of which possess integrated mechanical movement and a 41-megapixel life camera to record the
wearers experience.

Offering the tantalising possibility of an even closer augmented reality is the prospect of LCD display-embedded contact lenses by Nano-electronics Belgium researcher Imec. Effectively ousting the need for a screen, the spherical curved LCD display created is the first stage towards a totally pixelated lens display for the wearer. The initial prototype cleverly showed a dollar sign image, and this technology is thought to find its crucial future use in medicine and the cosmetic industries. Lenses could be created to help existing retina sensitivity problems or function as adaptable sunglasses . The imagination is the limit on this particular development

Perhaps the most subtle piece of wearable tech is the Geak Ring by Shanda, which enables instant unlocking of smartphone devices and easy data sharing through near field communication technology. A device for technological intimacy as well as privacy, the ring is designed to allow the owners photos, contact details and any other information to download when the ring is touched against anothers handset. With all of these products on the market or rumoured to be in development, it is clear that clothes are set to become more than just an everyday practicality. So, watch this space Susan McDonald is a corporate lawyer at Taylor Vinters LLP with a specialism in venture capital and private equity. Image source