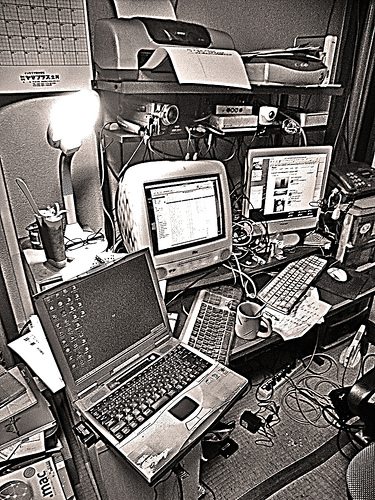 And although it’s nothing new, people have found solace in that ‘trick’ called looking busy without actually doing any work. Yes, the point is often to give yourself breathing space after a stressful load of work, but it has also become apparent that our love for social media, and memes, have followed us into the workplace.

But what are the warning signs and how can you employ such methods yourself? Bernard Yoo, co-founder of Bombfell.com, suggests you “walk fast and furiously, and with purpose. Speed-walk through the corridors. Take tight turns around corners, flaring your hip out to avoid the edge, because you don’t have time to leisurely walk around that corner!” “And if your company has internal IM or gchat, connect an old cellphone or beeper to your computer mouse with a rubber band. Call/page it late at night so that it activates and shows you logged in and active”, he said. Blogger Clayton Shumway explains that a little sneakiness is needed. “Be sure to stay four minutes later than everyone else. You can’t afford not to put in those extra hours. And keep a hidden stash of used lean cuisine boxes. When you get back from lunch, make sure no one is looking and put a couple on your desk. You just don’t have time to take a lunch.” As a bonus, Shumway adds: “Keep a hard and soft copy of an Excel spreadsheet, and make sure it has lots of numbers and graphs that no one but you can understand. Pull it up when someone walks by (which brings up another point, get a rear view mirror attached to your monitor) and take it with you whenever you go somewhere.” On Quora, a mystery man by the name of Russ Davis shares a nifty trick he learnt from a medic. “While in the military I was assigned to a artillary battery,” he wrote. “There was another medic there that was to clock out of duty about two-weeks after I showed up. He never went anywhere without a clipboard with a couple of sheets of paper on it. He explained that as long as there was something in your hands you looked like you had something to do.  “For the next couple of weeks, as he showed me around base, him with clipboard in and and me without, invaribly, I would get tasked by some sargent, lieutenant, or whatever to do some task. He just walked away going about his business. When his final day came up, he willed me his clipboard. 16 months later I passed it on to yet another. I have always wondered how many others may have made use of that clipboard.” ESL Instructor Anne W Zahra said: “Pile a bunch on your desk. Make sure they’re shopworn and have bookmarks sticking out. Choose obviously work related/ business “performance” titles the others will feel guilty they haven’t read.”  But for Seinfeld’s George Costanza, it apparently all comes down to looking annoyed. By Shané Schutte