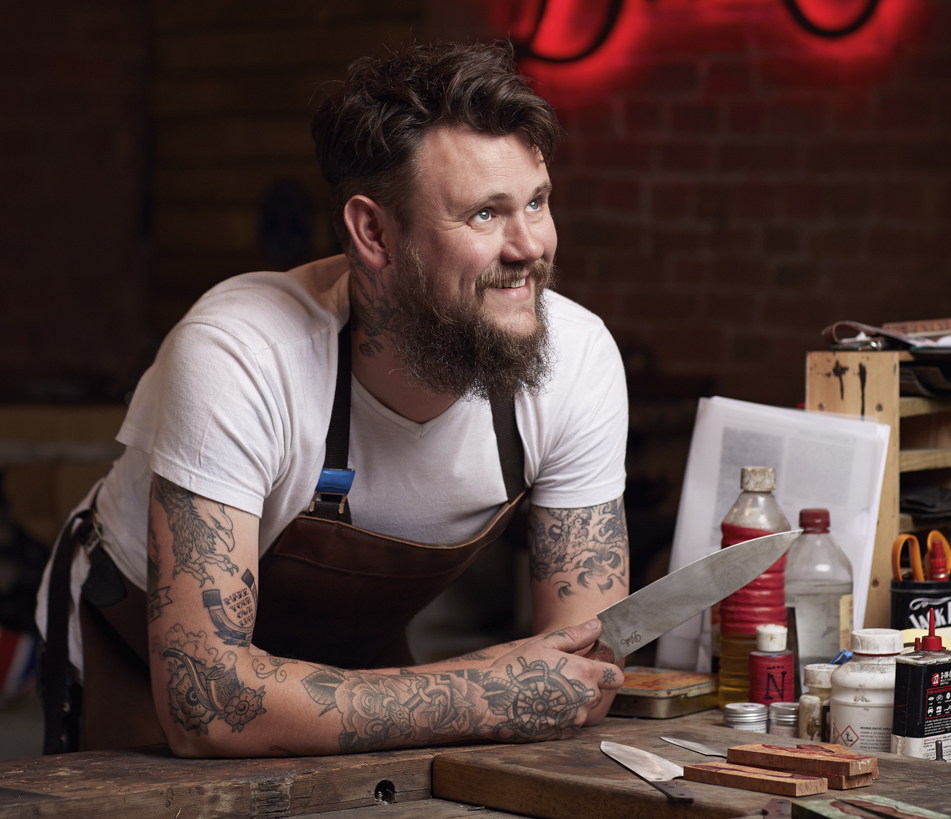 Share via
Benjamin Edmonds? journey to Blok Knives started at his kitchen counter. Where twiddling his thumbs and desperate to create something of his own, he scrolled through Youtube videos, looking to see what he could create with his bare hands. His passion for cooking tutorials led him through the YouTubesphere, and eventually, to videos about making cookery knives. The next thing he knew, Edmonds had bought his own steel, and began making his own knives in his country kitchen. ?When I worked as a graphic designer I was chained to a desk for hours. I wanted to create something tangible. It was like a ripple effect. I got some basic materials online and started Blok Knives in 2012,? explained Edmonds. But at this point, his knife making was still more of a passion project, but not for long, as the Derbyshire self-starter was about to gain his first customer. A chef at a local pub had heard that Edmonds was crafting his own knives and wanted to have a look at his goods. This led to a number of pint-holding punters wanting to see what Edmonds had to offer too, and before he knew it, he had made his first sale in the pub garden. Before long, Edmonds found himself setting up his own artisanal workshop with three paid employees in tow. But his startup journey didn?t end there, he wanted to go further.

?We were looking to push out a product we could sell in shops. To order a knife before you had to order directly from us. I wanted to get the brand out there more”.

Edmonds found himself at a tricky growth stage that so many startup founders find themselves at, where they have outgrown their micro-business format, but need assistance to scale up. “Up to this point, I had grown my business organically. But we were looking to create a hybrid product with a Sheffield based steel producer and launch it in independent cookery shops and outlets. There was a chunk of money that was needed for development”, says Edmonds.

Applying for a Grant

Today, Blok Knives is going strong, with turnover growing by an impressive 33.3% compared to last year. Part of their success is in their ability to offer consumers products that appeal to both ends of the market, from high-end offerings, to more accessibly priced items. The latter of which, was facilitated by their collaboration with the Sheffield steel manufacturer, that in turn was made possible through the grant money.

“This collaboration means we’re able to scale down the knife product in price, meaning it’s more accessible to customers and able to be sold in shops.”

“Before, we couldn’t deal with the volume of demand. But the FedEx cash injection has allowed us to scale up,? says Edmonds.

Edmonds found out about the grant from his FedEx representative, a man he affectionally calls ?FedEx Pete?. This connection came about because Blok Knives had been using the FedEx transportation services to deliver their knives to customers when they were starting out. “He thought we would be a great fit for the grant. He knew we were after global expansion, and he said that FedEx wanted to help a business that held similar goals”, says Edmonds.

?Without winning that investment money we would have been stuck where we were?.

Edmonds and his team wanted to retain the ?handmade culture? value of their product even when scaling up, and they made this point clear in their application. “We put together a pitch video to show the judges how we make the knives. While they wanted statistics, they also wanted to see how we brought the tone and feel of our business across”, says Edmonds.

What did Blok Knives do with the money?

Edmonds stayed true to his word and used the ?20,000 FedEx Small Business Grant UK to upscale his business, undertake that collaboration with the Sheffield manufacturer, and produce more accessible knife products for sale in stores across the UK and further afield.

?It’s jumped us up from that artisan category to where we’re at now. We’re better known in the industry and are able to work with the big guys”.

Now a nationally recognised knife brand, Blok Knives has been able to retain its ?handmade? northern identity and sense of craftsmanship through the cash injection they received, as it allowed them to choose the manufacturer they wanted. “FedEx was about investing in somebody, and investing in a business”, says Edmonds as our conversation draws to a close. Well, they certainly did that! To enter the FedEx Small Business Grant UK 2018, please click here. Entries close on 28 November 2018.