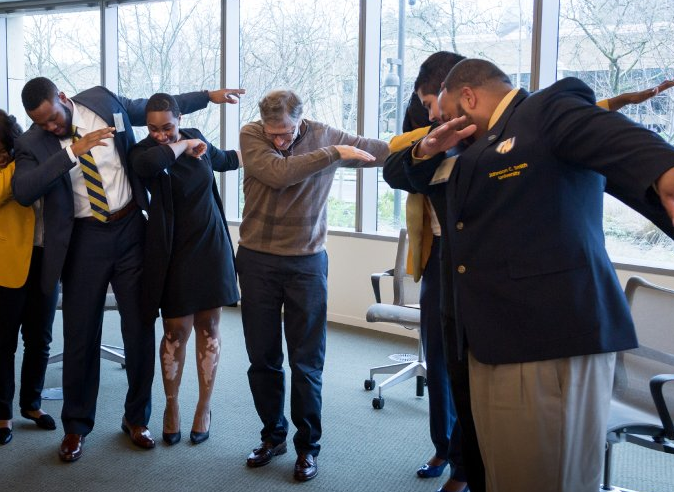 It?s the end of the week, which generally invokes the ?Friday feeling? across the country, as business leaders and their staff prepare to unwind.

We?ve taken heed of that trend with the launch of a new weekly Feel-good Friday feature, which will highlight a standout cause, charitable campaign or philanthropic giving moment to warm even the chilliest of hearts. Although he?s the richest man on the planet with a $75.8bn fortune, Bill Gates is not afraid to get his hands dirty ? literally. In January 2015 he eagerly promoted a venture that turns waste into drinking water and necked a glass of the liquid. Moving on from sanitation, education is Gates? present focus and he highlighted his new agenda on his blog. ?When I was applying to college, I wanted to go to one of the best schools. At the time, I thought of ?the best,? as the colleges that were the most selective. I applied to Harvard, Yale, and Princeton?schools whose reputations are burnished as much by the huge numbers of applicants who are denied admission, as the privileged few who are let in,? he said. ?But over the years I?ve learned that there are many other ways to measure what makes a school great. Institutions like Harvard (where I ended up going) have an important role to play in higher education. They do amazing research (which is something I support, enthusiastically) and can have their pick of the top students from around the world.? He went on to say it?s universities that take on students with lower grades that he finds equally impressive, particularly as the low income youngsters could face problems securing access to higher education, and noted ?a college degree is the surest path to the middle class?.

?Our foundation is always looking for universities that have learned how to give these students the support they need to graduate. They are not just opening the door to college for a new generation of students. They are also helping to redefine the future of higher education in the US,? said Gates. He visited administrators from Johnson C. Smith University and Delaware State University where he discovered that students are not ?cherry-picked?. ?They treat us like family. They put us in a position to succeed and the only option we have is to succeed,? said one student, who is completing a night programme degree while working. Posing with a handful of students, Gates revealed that he too learned a lot during his visit and ?not all of it was school related?.

I learned a lot from these great students? (not all of it was school related): https://t.co/vdiJx4fYRh pic.twitter.com/PfUrmu2tct

As you can see, the philanthropist embraced his inner dancer to perform ?the dab?, truly giving back by attempting the hip-hop move.

Is Bill Gates trying to Dab or is he dancing to MJ’s Thriller? pic.twitter.com/va4f80OPvT

@BillGates One of my idols. Now I’ve got to teach my parents how to dab.

If you?ve got the feel-good Friday buzz, check out the most generous business founders and CEOs alive today. By Zen Terrelonge