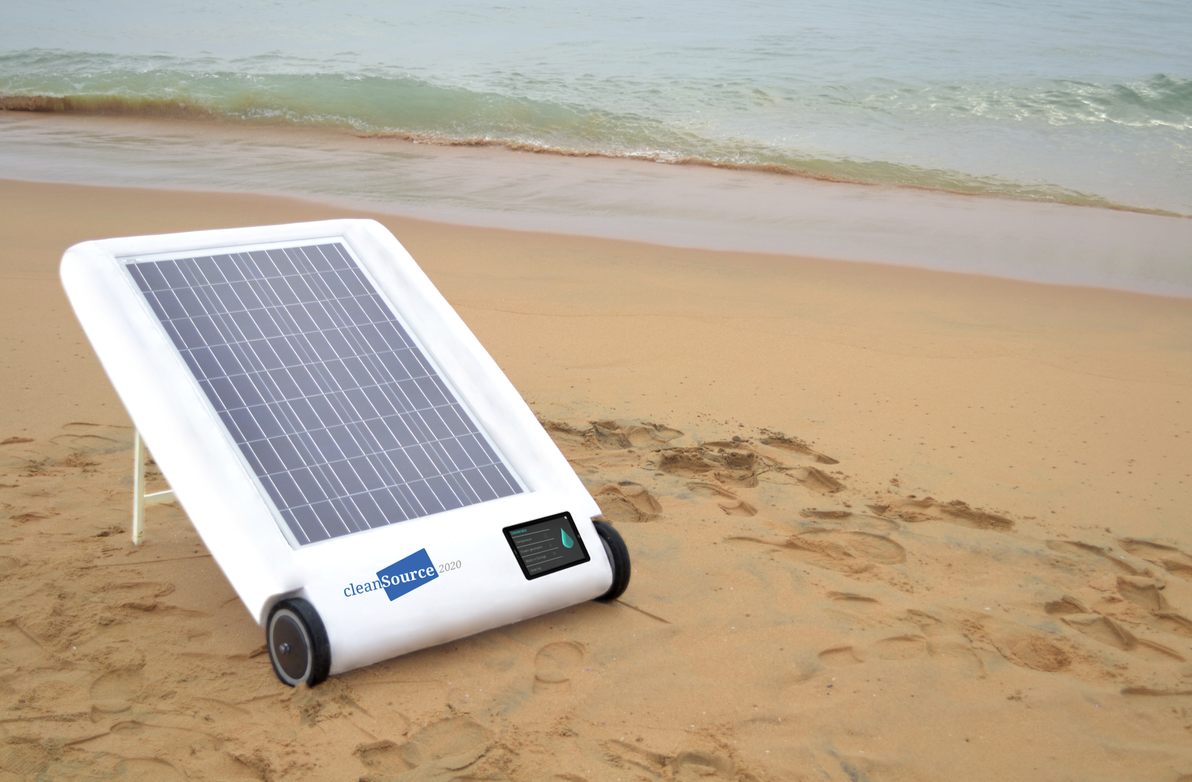 The company was recognised by Real Business as one of the UK’s 50 most innovative enterprises at our Everline Future 50 event. Desolentator achieved further glory as the business received the Environment and Sustainability Award for its commitment to making worldwide change.

With the end of the week here, marking time for another dose of Feel-good Friday action from us, we’ve spoken to Shulli Clinton-Davis from the company’s business development team about Desolenator’s grand vision. Finance was initially raised through an Indiegogo crowdfunding campaign, using a reward-based approach, and the business went on to achieve partnerships with organisations and government bodies, which resulted in units getting pre-ordered. Funding has also come through grants, while an angel investment round is in the pipeline. Following a pilot run, mass distribution through its partner network is on the agenda. Discussing the water crisis and Desolenator’s vision, Clinton-Davis said: “There are currently one billion people without access to clean drinking water and by 2030, half the world is expected to be living in water stress. “People should take notice because this issue will soon be broadcast over the news and will be impacting our lives. Our solution helps to prevent the water crisis from worsening and will result in economic growth due to increased employment, reduced waterborne disease and gender equality.”

She explained that the company’s proposition makes it “novel” in that is sustainable thanks to solar power, while it’s able to act as a household device – one that purifies all sources of dirty water into clean drinking water. Noting there are other devices on the market attempting a similar crusade, Desolenator’s patented technology means it creates “four times more water than peers”. “The product is en-route to becoming the most affordable ($0.005/L), high-tech household solution on the market, and our incorporation of the latest user interface technologies – data analytics, remote monitoring and mobile micropayments – will enable us to provide families of five people at the top and bottom of the pyramid with enough drinking water to satisfy their needs,” Clinton-Davies explained. Validating the science was the key in the beginning, with CEO and founder William Janssen developing the prototype in his living room. Convinced he was onto something special, he set out to build a strong team, which was coupled with securing an international patent. Clinton-Davis continued: “William realised that if he told people about the uniqueness of the Desolenator technology and the size of the market, then there would be a high chance of someone trying to copy & block it, so he immediately developed and implemented a strong IP protection strategy.”

As for the team, everyone on board is passionate about the company direction and vision, with scientists, engineers, sales people and cleantech experts approaching Janssen organically after his initial recruitment push. In addition to fending off the potential threat of copycats, another challenge was the expense of developing the hardware itself. “Developing a hardware product that utilises the latest technologies is always a longer, trickier process in comparison to developing a mobile app. Working with product design and engineering firms is also difficult because the work is expensive and you can’t be 100 per cent sure that the results you obtain will be as you expected,” said Clinton-Davies. “We found this whilst building our basic functioning prototypes. Working with the Imperial College fluid dynamics experts, and incorporating technical people into our team enabled us to regain control of the product development process.” As for achievements, Clinton-Davis highlighted the firm’s successful completion of a crowdfunding round in February 2015.

“This effort brought together a team of supporters with zero marketing budget to launch a global communications campaign that garnered support from grassroots organisations as well as mainstream media,” she recalled. “The campaign page on Indiegogo generated in excess of 75,000 hits and triggered 11,000 referrals to the page Including 1,777 tweets and almost 3,000 Facebook shares. Desolenator, which formerly had no social media presence, today has a 2,500 member-strong Facebook community and over 10,000 Twitter followers.” While a fierce following was procured through the campaign, it achieved a $166,000 investment from 850 contributors in 51 countries, while 150 units were sold – validating the commercial opportunity. Clinton-Davis said securing a place in the Future 50 has reaffirmed Desolenator’s belief it will succeed as a mass market water crisis solution, which she referred to as
“the greatest resource threat facing humanity”. “The Everline Future 50 has a track record of accurately predicting which companies will be successful. At the award show itself, there were alumni who are now running famous businesses. Knowing that the hard work we put into developing this business is beginning to pay off is a strong motivator. “Our product is eco-friendly and sustainable because it runs on just solar energy, it does not pour tones of toxic waste into oceans, like competitors, and it doesn’t drain the grid or use dirty diesel generators. It is low-maintenance and it has a long lifespan.” Looking ahead with a view of retaining its reputation while achieving growth, Desolenator will continue developing the range of products available, ensuring they remain high quality, long-lasting and environmentally friendly. “In five years’ time, Desolenator will be providing clean water to over a million people as a strong, medium-sized company with an international team,” said Clinton-Davis. She added the big goal is to become a well-known “must have” household brand that will sell units worldwide. By Zen Terrelonge

In April, these eight UK social enterprises secured seed funding to use tech for good.