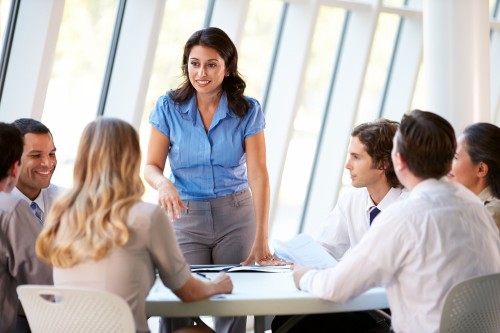 Despite high-profile executives like Sheryl Sandberg and General Motors CEO Mary Barra proving women can lead just as well as men, the proportion of women in executive control over firms still has room for progress.

Similarly, research from CMI found that women are paid an average of 22 per cent less than male counterparts, or ?8,524, while that gap widens to ?14,943 for senior or director-level staff. As such, we took a look at how female trailblazers across the globe can find further success. According to a 2011 article in the Harvard Business Review, many women do not feel confident at work, leading them to be passed over for potential promotions and raises. Kathryn Heath, one of the article’s authors, suggested this insecurity could stem from a lack of female colleagues or bosses. This was echoed by Michele Gelfand, psychology professor at the University of Maryland, who claimed the discomfort women feel when negotiating for higher salaries and promotions comes naturally as they are often trained to be non-confrontational. “But it’s not enough for women to simply be good at their job,” she said. “Standing up for themselves is also key to becoming the boss. Even if you are working hard and doing well, you really need to be stepping up to the plate and asking for things.” And although self-promotion is a key step for women who want to get noticed in the workplace, many are uncomfortable speaking about their accomplishments. “In their early life, girls have been rewarded for following the rules and not speaking out,” said Jane Finette, founder and executive coach at The Coaching Fellowship. “It’s just not something girls have been trained to do.” On the back of that note, however, Peggy Klaus, author of “Brag!: The Art of Tooting Your Own Horn Without Blowing It,” explained that by fitting the stereotypical mould you are less likely to be noticed.  To become more comfortable with negotiating, Gelfand suggested women find out what is negotiable in their workplace and proactively ask for more. “I would definitely recommend women take this skill as seriously as they do finance or accounting, because this is really going to help the bottom line of their salary and of their advancement.” Read more about women in business: Women should also not be afraid to seek the advice from others, said Heath. She suggested gathering a group of close advisers who could help you make business decisions or just provide support. This “board of directors,” could include professors, family members, colleagues and even former bosses. “Do not try to go it alone,” she said. It was further highlighted in a 2008 Hewlett-Packard report that women only applied for a job if they believed they were 100 per cent qualified, while men did so with only 60 per cent. This is due to women underestimating their value, Klaus explained: “I have seen this time and again where there is an opportunity in a company, and the woman will be very qualified but she will second-guess herself.” According to Claire Moran, managing director of The Forge Public Relations, timekeeping was her biggest key to success: ?Prioritise ruthlessly. Have a [list of] ?must do? and ?nice to do? things each day, but don?t feel like a failure if you don?t get through it all. Always plan the following day ? work and other things you need to do ? the evening before. Try not to get distracted, and delegate.? Meanwhile, owner of School Speakers, Claire Young, suggested that balancing your work commitments and home commitments requires dedication: ?Be brutally honest with yourself about what is important to you and prioritise your time accordingly ? and stick to it!? Essentially, however, we’ll leave you with some advice from Jess Levin, founder and CEO of online wedding vendor directory Carats & Cake: “You can spend your life building someone else?s dreams or you can build your own.” Concerned with issues surrounding gender diversity in business? Don’t miss the Real Business First Women programme: Drawing on years of the First Women movement and the phenomenal network of pioneering women the Awards has created, this programme features The First Women Awards and The First Women Summit ? designed to educate, mentor and inspire women in all levels of business. By Shan? Schutte