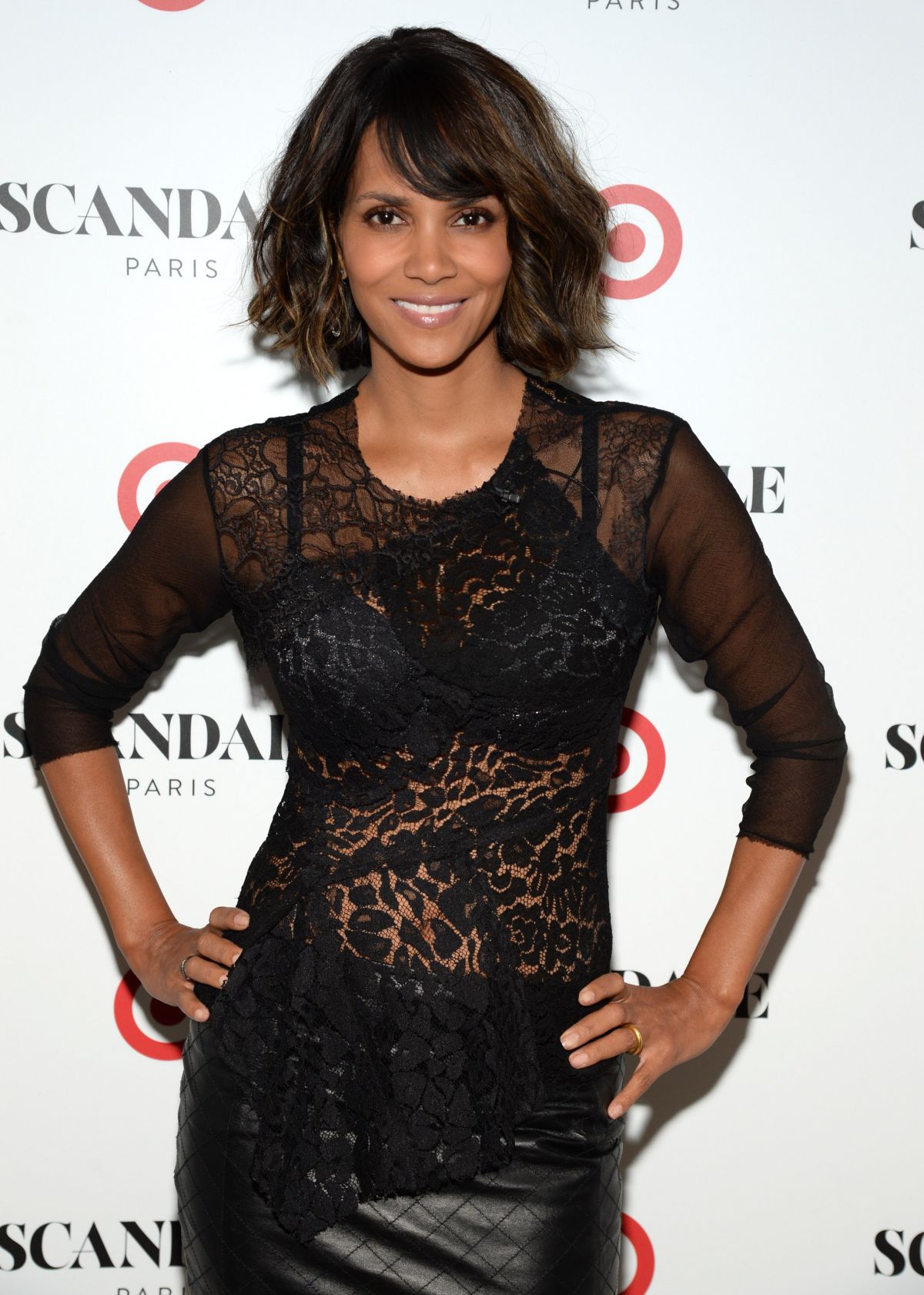 Founded over 80 years ago, Berry claimed the brand was struggling when she first came across it as the underwear was too expensive. Alongside Erik Ryd, her business partner, they bought the company.

While filming for series “Extant”, Berry is mostly involved with the design and fabrics used, though she is already planning on expanding from undergarments to bathing suits and nightgowns.  According to Berry, this move has given her some semblance of a work-life balance. “Having a business like this means I can do more work at home and be with my family,” said Berry. “I have two little kids now. I can’t travel around the world and do a movie like I used to.” Jo Piazza, author of “Celebrity, Inc: How Famous People Make Money”, suggested that it was “way more” lucrative than making one movie a year. Piazza also noted that as most stars started their businesses while still in their filming prime, they tended to become co-owners, leaving most of the day-to-day operations of the company to a partner in crime. She also claimed that male celebrities were more likely to own a business partnership. However, females seem to be realising the potential. Piazza doesn’t mean the age-old product endorsement method either, nor the way they have a habit of sticking to sectors that involve makeup, shoes, producing movies or clothes. They’re launching businesses in a myriad of industries.

Take Jessica Alba, for example. The “Fantastic Four” star co-founded The Honest Company, which sells non-toxic diapers and baby products. A percentage of proceeds is donated to charities “addressing critical health and social issues” affecting children and families. This has led the company to apply for B Corporation status, which showcase how beneficial the company would be not only to society, but to shareholders as well. While pregnant with her first child, Alba became aware of how many baby products contained toxic chemicals. Much like Berry, she partnered up with someone – Christopher Gavigan to be exact. He was a writer for Healthy Child HealthyWorld and steered a nonprofit aimed at children’s health. Brian Lee, founder of Shoedazzle and LegalZoom, was later brought on as CEO. The inspiring goal behind Honest is that Lee and Alba both want to create a brand that makes products that are safer for the people who use them as well as safer for the environment.  The company may have begun with diapers and baby wipes, but it has expanded into soaps, shampoos and baby formula. But its next move includes an IPO. Honest raised 70m in a funding round led by Wellington Management Company and is valued at almost $1bn. Read more about celebrities: Alba has also admitted that she can be a scary boss. “Sometimes I’m a little more iron fist than velvet glove. I’m straight to the point. I’ve made people cry. I have to say, ‘This isn’t personal. This is what needs to get done, and it’s just as simple as that. And… we’re not crying anymore.’ I’m learning to tone myself down,” she noted. In fact, Alba’s mother has called her “a workaholic control freak” when it comes to Honest.

Alba has also admitted that being the only woman among men has its challenges.

“My partners are men,” she said. “Whenever I say something that’s kind of against their intuition, they go back and talk to their wives. And then their wives usually agree with me. So that’s how we get stuff done over here.”

Alba added that being an actress was like a vacation; “business is relentless”. Most of all, she loved how everyone work hard were so committed.

Unlike Alba’s business, Myx is still relatively new. Rapper Nicki Minaj has gone where only one other male rapper has gone before. Jay-Z partnered with Champagne Cattier, P Diddy plays a role in Cîroc vodka, but only Ludacris co-owns an alcohol business – Conjure Cognacs. Aiming to tap into the Moscato market, rapper Nicki Minaj founded Myx Fusions with Monami Entertainment CEO Mona Scott-Young and Peter Reaske. According to Minaj, she’s “never been afraid to walk into the boy’s club. Ever. Ever, ever, ever”. It may sound like an odd thing to say, but Minaj plans to “dominate the market” by handling her brand like a man.  “I kind of think of myself almost like a man,” Minaj said. “I’m not going to fall back from something because it’s never been done before by a woman. It’s time for a female Jay, a female Puffy.” “She knows,” Scott-Young said, “how to leverage her celebrity.” It seems to have worked since Myx has become the biggest-selling Moscato wine in the US. Scott-Young also proclaimed that Minaj is quite the savvy businessperson and “innovative trendsetter”. She plans to use those skills to “revolutionise” the wine industry.

One of the reasons she had entered the wine business was to change the way consumers drank wine, and also how it made them feel.

Instead of the normal large bottle, Myx can be found in smaller ready-to-drink ones and are sold in packs of four. The team also wanted to concoct something that would make women feel sexy without them getting too inebriated.

Minaj explained that she had been approached to be a part of liquor brands before, but had turned them down because “it wasn’t believable and it didn’t make sense for Nicki Minaj”.  “I’m not going to shove it down my fans’ throats because they know when I’m honest about something I love,” she said.

Passion seems to be the key to business success, and more often than not the main reason why a startup is created. It is a much-needed trait for leaders that has proven to be crucial time and time again. Alba wanted a better environment for her kids and Minaj wanted to make women feel good without getting drunk, albeit in a way that was true to herself as well. So what about Grammy Award-winning singer Alicia Keys, who founded AK Worldwide in 2009? She wanted to inspire people the way Minaj did, but away from the reputation of her music career. AK Worldwide was set up to handle her non-musical and philanthropic projects. “I will always be focused on my career in music, but I am also inspired by the beautiful people and beautiful things I encounter in the world,” Keys said. “AKW is my chance to channel that energy into projects for which I have great passion.” Some of her projects have included IAmASuperwoman.com, which spotlights inspirational women and causes. But her resume sports a corporate role in Blackberry as well. Keys actually became Blackberry’s global creative director in 2013, a role that would see her command business initiatives to drive engagement and brand perception. In other words, she was hired to make BlackBerry cool again, but jumped right out again in January 2014. Since then, Keys has become somewhat of an app entrepreneur.  Through AK Worldwide, she created “The Journals of Mama Mae & Lee Lee”. It is an interactive storytelling app complete with journal, readable books, and exclusive tracks from Keys herself, with the main aim of educating children. CEO and co-founder of Bento Box Interactive Scott Greenberg, who helped Keys with the development of the app, noted that she “loves space, she loves technology, so for us, she was the right partner creatively on a project to do technology wise”. Greenberg also suggested that Keys’ app would reinvent interactive storytelling through its 3-D world experience. “The interactive elements are what really drive the story forward,” he said. “You’re exploring this world and looking at the journal, using the journal, looking at the music box, playing the music. It’s not a flat experience. With games, it’s more of the gameplay that’s pushing the story forward.”

These stars are far from the only ones to have more to do with business than promote brand products or, as previously stated, become hooked on the industry all female celebrity entrepreneurs seem to fall under: Fashion. Indeed, there are two more that could soon be added to the list. Jessica Biel is currently making her way into the food industry. She is set to open a family-friendly restaurant called Au Fudge at the end of 2015. The menu is filled with kid-friendly food and is by all means colourful. It’s motto is “Save Room For Desert”. Dubbed a “Soho House for kids”, “it would be a place where A-listers would feel comfortable bringing their kids to dine and take part in cooking activities.” Similarly, singer Beyonce has delved into food, but has taken a different route. She has most recently become the owner of a vegan delivery service. Beyonce joined forces with her trainer Marco Borges to launch 22 Days Nutrition, which brings completed vegan meals directly to your door. The price is $609.84 for 22 days, like the name says. By Shané Schutte