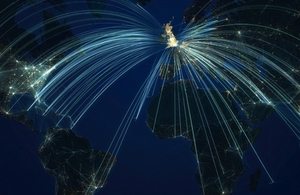 Trade Minister Lord Livingston has announced that UKTI has helped a total of 47,960 businesses to export for the first time or find new markets in the year 2013-14

The figures have been published as part of UKTI’s annual Performance and Impact Monitoring Survey (PIMS) and show that the support was worth £49.1bn to the UK economy in additional overseas sales as a direct result of the advice, which is expected to create or safeguard 220,000 jobs. Companies receiving support related to the US saw this biggest increase, 51 per cent (4,131 businesses); followed by China, 47 per cent (2,961 businesses); and Brazil, 38 per cent (1,415 businesses). Other countries included the UAE, 28 per cent (1,824 businesses); Germany, 24 per cent (3,413 businesses); France, 19 percent (2,199 businesses); and India, 15 per cent (2,453 businesses). “UKTI has found them distributors in new markets, helped them sell online around the world, supported their first trade show, provided them with advice on over 100 markets around the world and much more,” says Trade Minister Lord Livingston. “We want to increase the number of small and medium size companies that sell internationally as this creates growth and new jobs in all UK regions and all industries.” UKTI also announced that UK food and drink exports now reach a record 150 countries, a year on from the launch of the UKTI and Defra action plan for the sector. The government has helped 2,500 food and drink businesses sell their produce abroad in the last 12 months – more firms than ever before – generating £300m for the UK economy, says the report. UKTI will be holding its 6th Export Week during the week of 10 to 14 November with a series of events all over the UK aimed at helping small and medium sized companies.