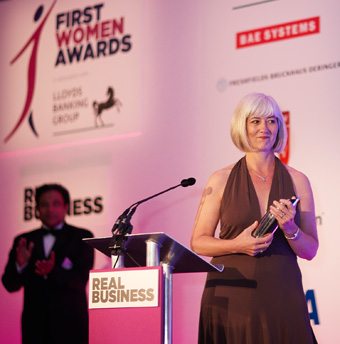 This year’s First Women Awards gala ceremony will be held in June 2011, and once again, we’re seeking nominations.

Created by Real Business and the CBI in 2004, and held in association with Lloyds Bank Corporate Markets, the First Women Awards celebrate those women who have broken new ground in their careers and have actively created opportunities for other women to follow in their footsteps. Last year’s winners featured some fantastic entrepreneurial women including Dame Mary Perkins, founder of Specsavers; food entrepreneur and multi-million selling author Annabel Karmel; and Vocalink CEO Marion King. Now we want to hear from you: are you a trailblazing woman? Have you changed the way your industry works? Or do you know a businesswoman who has? If so, get nominating. The First Women Awards are a fantastic opportunity for exceptional women. In addition to taking part in a star-studded gala ceremony, winning an award can make a big difference to your business, as Anne Walker, the founder of International Dance Supplies explains: “Winning the First Women Award was a big boost, not just for me, but for my whole team,” she tells us. “It’s great being acknowledged for the many day to day achievements which, added together, make a very special company. Being at the Awards ceremony with so many successful women was a real inspiration and certainly sent me home feeling I could conquer the world! It really was very special for me.” Anne Walker is just one of many fantastic past winners. Walker started making leotards in her bedroom for her students, but when other teachers asked for costumes too, she founded International Dance Supplies. Thirty years later, with a £7m+ turnover and 60 staff, International Dance Supplies is now the UK’s largest B2B dancewear mail-order company supplying danceware as far afield as Australia. She won the retail and consumer gong in 2009. Last year’s ceremony was attended by more than 450 guests including Home Secretary Theresa May, Baroness Neville-Jones, Helen Alexander of the CBI, ITV’s Fru Hazlitt and royal biographer Penny Junor. This could be your year – find out more information on the First Women Awards here.