With Germany’s recent backing of 30 per cent quotas and the EU parliament’s overwhelming support, the subject of a specified amount of women on boards has been on everyone’s minds. Needless to say, the UK has thus far resisted. But should the issue really be enforced? And would women want quotas anyway?

Professor Baroness Alison Wolf suggested that despite what we might say, “we are in an amazing place, utterly extraordinary compared to 100 years ago. But this could all be undermined by quotas. Norway has a target of 40 per cent women on board. Indeed, there’s evidence to suggest that companies with women do better, but it has had no effect on the pay we receive or future promotion structures. There has been no real nationwide impact.

“The obvious answer is that companies have misunderstood what it means to be diverse. Quotas have given women no favours, nor does our recent emphasis on having more role models. Statistics have suggested that white working class boys do worse in education than any other group in society. If having role models at that stage was so good then why are they doing so badly only to achieve such success later?”

According to Dame Julia Cleverdon, vice president of Business in the Community, “Quotas are bad for business. Quotas are for fish and not for women. The wrong fish end up slipping into the net and the right fish fall out of the net because someone tore small holes into the net.

“I remember a time when there would be signs outside saying ‘blacks, red-heads and Irish shouldn’t bother applying here’. Nowadays businesses wouldn’t dream of acting in that way. But it took us a while to eradicate such behaviour. This is why having voluntary targets will help more than quotas can. The world has moved because business leaders have seen the point of it. This is the beginning wave that will cause a flood.”

Louise Entwistle, director, government and public sector of Mastercard, has a different opinion.

“Progress has been good over the last decade,”she said. “And it seems that Lord Davies’ target will surely be met. But do these published figures really mean progress? By appointing more women onto boards, businesses have the ability to influence their ethos and culture.”

But, essentially, the progress that we’ve seen was such a success because it was driven by targets and goals.

“Companies that continue to deliver on targets are more likely to invest more in their staff. This is something we should strive towards. Perhaps it’s not as simple as increasing women on boards. Lets think of different targets for sectors and such. In the FTSE 100, statistics showed that just under half of them have a 50 per cent success rate because they set constant goals. You have a 20 per cent success rate if you don’t. Doesn’t this show that quotas will accelerate more women onto boards?”

According to Rowena Ironside, chief of women on boards, “the legacy of our patriarchal past is still there, so it’s hardly surprising that most businesses are run by males. Every part of society rests predominantly in male hands and some of it needs to be relinquished. But history shows that they won’t do so unless they’re forced.

“A lot of this is based on the myth that implementing quotas implies sacrificing merit. We speak of merit as if its something we all agree on but relies on the eyes of beholder – something which is can clearly be seen in the hiring process. We believe that quotas and merit are mutually exclusive. But how can that be? There is no shortage of talented women!” 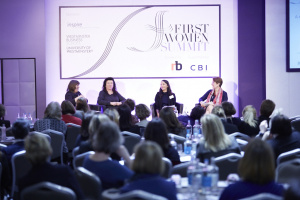