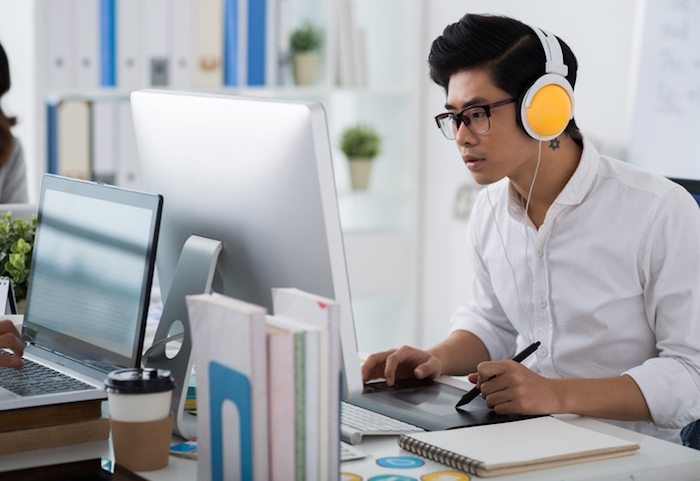 Share via
It depends on the industry, the role, the person in question. If you play music over the speaker some will undeniably be annoyed. Some may even dislike colleagues who try to mute the sound through headphones. In the long run, many employers would thus rather no music be played. Yet the facts, the positives, persist. A 1972 study cited that?factory workers performed better?when listening to?upbeat music, and while it didn?t work for?everyone, the Chinese University of Hong Kong highlighted?its penchant for?fostering?multitasking?capabilities. Surgeons work more accurately?when tunes play in the background. In fact, their performance decreases drastically when there’s silence. So if you haven?t tried the “working while listening to music” combo, then give it a go. Fair enough if it?s not up your alley. But there are five songs in particular you need to ?trial? before making the ultimate decision. When Trade Direct Insurance found out?20 per cent of its 1,000 respondents listened to music every single work day, the company wanted to find out how it impacted their performance ? and which songs helped?them get the job done. Some 53 per cent suggested they became more productive. Half of UK staff said it made them work faster, with 20 per cent crediting their motivation to pop tunes. This was closely followed by rock (18?per cent) and dance music (15?per cent). Andrew Marlow, sales and service manager at Trade Direct Insurance, said of the research: ?Working alone on a worksite or sitting at your desk for eight hours a day can sometimes feel like a lifetime, but switching on the radio or putting your headphones in can help many concentrate and focus on the task ahead. ?It?s great to see that listening to their favourite songs is helping so many employees across the country become more productive and improve their work rate. These positive effects could potentially lead to stronger business perspectives and even an increase in returning customers.” What are the five songs that work the most then? Here they are in reverse order. (5)?What do you mean? by Justin Bieber? (4)?Rolling in the deep by Adele? (3)?Despacito by Luis Fonsi, Daddy Yankee and Justin Bieber? https://www.youtube.com/watch?v=uD8CUsjfzZc (2)?Shake it off by Taylor Swift? (1) Come on Eileen by Dexys Midnight Runners?