EY has announced intentions to track the outcome of certain events in 2017 – the first of which is Brexit. The year before saw the British public vote to leave the EU, with the government now expecting to invoke Article 50. It’s a complex process that will set business owners on edge, and EY hopes to set minds at ease by looking at what could impact foreign investment decisions.

First of all, it’s good news for the corporate landscape. The company surveyed 254 senior executives across 28 states part of the European Union in the hopes of finding out “what impact the referendum and resulting uncertainties are having upon foreign investment decisions and European ambitions”.

Historically, it claimed, the UK has been Europe’s destination of choice when it comes to foreign direct investment (FDI). Britain secured 20.9 per cent of Europe’s FDI projects in 2015, which went on to create 40,000 jobs. But will this record number come tumbling down thanks to the Brexit vote?

“There appears to be a growing likelihood that companies located in the UK will lose seamless access to the single market,” EY explained. “It also appears likely that some companies – and not just those in the financial services sector – will  downsize or transform operations both in the UK and, in consequence, Europe. However, keep in mind 56 per cent of foreign investors are still planning to grow their presence over the next three years.”

With that in mind, EY outlined what factors would likely impact investment decisions. Some 37 per cent deemed high volatility in currencies and capital markets the biggest risk to their investment strategies. Meanwhile, 32 per cent highlighted economic stability as the next-biggest worry.

This figure didn’t include Brexit – it was such a concern that it ended up with its own section, with 28 per cent claiming the result would alter their plans.

Further to that, the slowdown of global trade was cited by 27 per cent as a reason to possibly alter FDI routes, and competition from emerging markets, according to 19 per cent, could likely sway the destination of investment.

Rise in populist and protectionist feelings (12 per cent), slowing growth in China (11 per cent), talent shortage (ten per cent), and weak innovation capacity (five per cent) were also cited as risk concerns.

While it certainly seems like investors haven’t lost interest in the UK yet, the EY explained the FDI map was starting to shift, with Germany being the UK’s main challenger for the top spot. 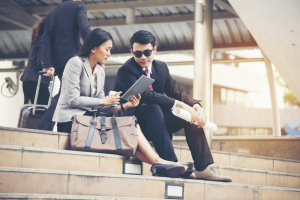 How to fall in love with WiFi this Valentine’s Day