Alan Vey and Annika Monari were two millennial academics studying in London when they decided to fuse their passions for science, tech, and maths to create a blockchain based business.

But that’s not where the story ends…

This was no typical ‘rags to riches‘ tech story, Vey and Monari were using their academic talents to take on one of the biggest issues in our society, fraud.

Their company in question, Aventus, came to life as a result of these passions and was accelerated by their desire to make a dent in ticketing fraud at music events.

Real Business sits down with the dynamic duo to learn more about the impactful potential of blockchain technology, and how it can be used to empower the customer experience…

Your legacy: What do you want your business to be remembered for?

AV: We run a technology start-up called Aventus, which we created to combat the selling of counterfeit tickets and uncontrolled resale in secondary ticketing markets.

Essentially it’s a secure solution that can give event organisers and ticketing agents control over the whole lifecycle of their ticketing inventory, provide transaction security, and allow artists and labels to enforce fairer ticketing for fans.

AM: The Aventus Protocol is an open standard built upon ethereum blockchain – it’s non-profit, open to all to use and build upon. We hope that it will become the backbone of a new and interoperable ticketing ecosystem.

“We partner with ticketing platforms to build consumer-facing apps and services that act as a bridge to the blockchain. This helps create new fan-driven services that help them to increase reach and monetise new revenue streams and deepen customer relationships.” – Annika Monari

How do you measure success?

AV: We rally the team around optimising a few specific metrics that, to us, define success: numbers of tickets flowing through protocol, how many transactions can be carried out per second and revenue being made.

There are other less tangible elements, which are no less important to success: scalability and sustainability, how your teams are working together, hiring the right people and encouraging the right attitudes.

Do you plan to trade globally and enter new markets in the next 12 months?

AM: Absolutely – we’re already active in the U.S. and Canada will probably be next on the list. From there, Asia is a massive untapped market and it’s very blockchain-friendly. We’re researching that market and how best to tangibly explore soon.

How did you fund your business?

AV: We want to be the de facto blockchain ticketing standard.

We’re not acting in opposition to any of the traditional ticketing incumbents, so we’d like to see at least one of the key players actively and regularly utilising the protocol within five years – but hopefully, it’ll be more than one!

“In terms of the industry at large, we see it as being fairly similar to today in terms of the key players, although we expect to see the lines increasingly blurred between primary and secondary marketplaces.” –Alan Vey

In general, we think the standards of technology will be raised much higher, with better services and controls provided to artists and promoters.

AV: Being able to go to a traditional company and a huge player in the industry, someone who is very knowledgeable but quite set in their ways, and introduce them to something new is always a high for us.

We lead them through the process, get them to understand and engage with a new technology – when you succeed it’s very rewarding.

AM: Because we’re new to the industry, some people do try to take us for a ride.

We publicly raised a lot of money so certain people look at us like a piggy bank! Our approach to this has been to challenge their preconceptions, both by proving that we know what we’re talking about (a little confidence goes a long way!) and by hiring an experienced team with a background in the entertainment industry, who can bring that extra bit of gravitas to the table.

What would tell your younger self?

AV: Failure is not the opposite of success, it’s part of success – it means you’ve learnt something. And you can’t achieve success without ruffling a few feathers along the way – so don’t be scared of sticking to your own opinion and standing by what you believe.

AM: We want more technology utilisation for enforcing laws rather than laws themselves.

We would like to see a higher level of technical competency generally so they understand what they’re talking about. Some crypto-frameworks so we have parameters to work within, guidelines and support.

Your biggest piece of advice to other entrepreneurs?

AV: Open yourself up, make partnerships, look for joint ventures and try to democratise what you’re doing. As with any industry, work hard, stay motivated, be willing to succeed and learn from your mistakes.

What would make you a better leader?

AV: More time in the day! For us, implementing and refining procedures in order to be able to scale properly and retain oversight is going to be a challenge – more time on the ground with our team sorting out those processes is definitely going to be a priority.

On your tv planner right now…

AM: We both love The Good Fight; the major characters are all women challenging stereotypes. Billions. Power. We’re still catching up on Westworld S2, but it’s getting a bit confusing! 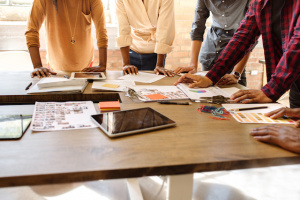 The benefits of content marketing and how to get started 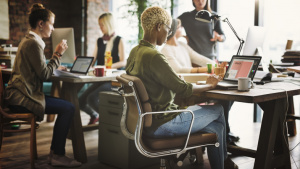