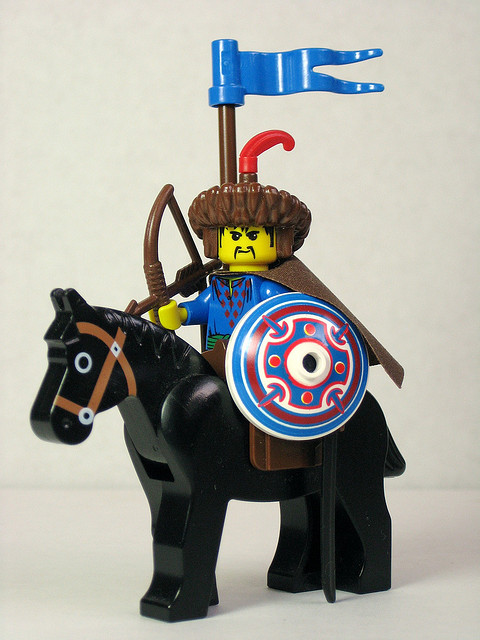 One of Genghis Khan’s earliest decrees in preparation to attack the Western Xia Dynasty was the creation of the ‘Yam’ and was one of the earliest supply and messenger routes. Arguably, however, Khan is credited with making the first mounted courier service. This route involved a series of post houses and way stations, which allowed soldiers to rest or take on a new mount, and to allow information and goods to travel with additional speed. Because of this route, Khan was easily kept in the loop when it came to military or political developments, not to mention that he found it easy to keep in contact with spies and scouts.

Believe it or not, we have Napoleon Bonaparte to thank for margarine. Discovered during the Napoleonic Wars, margarine was previously known as ‘acide margarique’, the Greek word for pearly. This is because French scientist Michel Eugne Chevreul’s fatty acid product consisted of pearly deposits. At the time of the Gunboat War, when British victory was clear, Napoleon III tried to think up ways to give his navy the luxury of butter in the form of a cheap substitute. So he organised a competition and offered a prise to anyone who could create any alternative. Enter French chemist Hippolyte Mge-Mouris, who used Chavreul’s acid to invent ‘oleomargarine’, later shortened to margarine. He won the prize, but nothing really came of it. Needless, to say, margarine tasted nowhere as good as it does today.

Philip Nelson, a professor of food science at Purdue, says it best: Napoleon wanted to get armies farther away from base, and the limiting factor was food, so he offered 12,000 francs for anyone who could come up with a method of preserving food. Little gentleman calledNicolas Appertput food into an earthen jar, covered it, heated, it and said,Aha, the food doesnt spoil, Ive kept the spirits out. They had no idea why it didnt spoil but hes recognized as the father of canning.

The first experimental version of instant coffee was tested during the Civil War. At the time, soldiers were given a generous ration of coffee beans, however, it would takes ages to dry, roast and then brew the coffee. And, as they are no different to we are now, needing a pot of coffee to start the day, the amount of time it took for the process to be completed drove the officers insane. When pre-ground coffee became available, army suppliers would often buff the product up with saw dust or dirt. So instead, the army came of with their own variation: instant coffee! This thick sludge was dubbed ‘Essence of Coffee’ and was merely added to boiling water and voila!

Strangely enough, the British found it hard to communicate because tanks kept cutting up the their cables. It didn’t help that the German’s knew some sneaky hacking techniques. This often meant that the army would have to rely on pigeons, runners, dispatch riders and even by using lamps. Macroni Bellini-Tosi was researching radio waves when he first came to the UK in 1896. Up until World War 1, he worked with the army navy and army to test whether radio waves could be put to practical use. Then he came up with a way to detect the positions of enemy stations, whereby the technology would also be used to trace the position of enemy submarines, vessels and zeppelins. ‘Wireless’ soon became an important part of communication.

According to Sheffield’s archives: “Harry Brearley of Sheffield developed what is widely regarded as the first ‘rustless’ or stainless steel – a product that revolutionised the metallurgy industry and became a major component of the modern world.” The British army was faced with quite the problem: due to the heat and frictions of the bullets, the guns barrel would often become, well, distorted. So they asked Brearley to invent a harder alloy. Apparently the invention of stainless steel was one big mistake. He threw all his failures onto a scrap heap, only to realise later that the steel had yet to rust.

This was the period in which the first pilotless planes were tested. There was even an unmanned bomb called the Kettering Bug, developed by Charles Kettering. It was said to be able to find its target at 40 miles away. It was the first cruise missileor drone if you willAnd it was designed to take off, fly for a certain distance, and then stop and dive into the ground,” said Jeff Schramm, a Missouri University of Science and Technology historian of technology.

You’re probably asking, what would an army possibly want with silly putty Well, Japanese forces infiltrated most of the rubber producing countries, cutting off the US to much-needed materials. So they put out a request for someone to create a substitute (there’s a pattern emerging her), and the call was answered by General Electric engineer James Wright. Sadly enough, the material had no practical uses. But kids seemed to like it just fine!

Research into penicillin dates back to the late 1800s, with its possible capabilities having been documented by one Ernest Duchesne. This research was later followed once more in 1928 by Sir Alexander Flemming. But the antibitoic was never actually put into use until the start of World War II when Dr Howard Florey was able to successfully test it out. It was then used to treat infected wounds throughout the war.

Believe it or not, Fanta was only created because of a Coke shortage! It all starts with Pearl Harbor and the US now being at war against both Japan and Germany. This proved bad news for the German branch of Coca-Cola as US decided to export the soda drink to their enemies. So Max Keith, the head of the company at the time, decided to make a product using ingredients available in Germany. He called it the leftovers of leftovers and slapped a trademark on it. By Shan Schutte