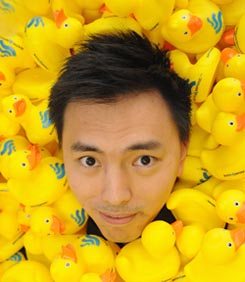 Since winning Young Entrepreneur of the Year at the 2012 Growing Business Awards towards the end of last year, there has been no let-up in our phenomenal expansion which keeps us at the forefront of the online bathroom industry.

Through continued growth and innovation, the company I founded in 2006 at the age of 23 has further enhanced its strong market position as a leading multi-channel online bathroom retailer in the UK, supplying bathroom furniture, equipment and accessories direct to consumers via its website. The company started in a spare bedroom just seven years ago, turned over ?14m in 2012 and is expected to reach ?20m turnover by the end of 2013. Following on from my success at the Growing Business Awards, BathEmpire.com was ranked 37th fastest growing private company in Britain in the internationally-renowned Sunday Times Fast Track 100, published in December 2012. According to Google and Hitwise data, BathEmpire.com is also the fastest growing online bathroom retailer in the UK. Already in 2013, there have been two major developments which will allow us to keep challenging market leaders and to ultimately achieve our ambition of becoming the largest business in the bathroom industry within the decade. This is a vital move for us as it will give us significantly more room for our warehousing and stock operations to increase product lines and explore new areas of the market, as well as our office accommodation. The company recently announced an ?8.5m investment by ISIS Equity Partners, allowing it to progress with a major ?5m relocation to enable further expansion and job creation. We currently employ around 100 in our team but expect that to grow to around 300 in the next three years. The former headquarters of Adams Childrenswear in Nuneaton, Warwickshire, will soon be home to the company with the move to the 169,000 sq ft complex expected to be completed early next year. Our new HQ is more than double the size of our existing base located just a few miles away. Fit-out work on the new building is underway and will eventually include 28,000 sq ft of new offices, vastly improved team facilities and possibly the company?s first public showroom. Winning the Young Entrepreneur of the Year at the 2012 Growing Business Awards was fantastic recognition and since then I have gone on to be named Midlands Business Person of the Year at the Midlands Business Awards as well as Young Director and Overall Director of the Year at the West Midlands Director of the Year Awards, organised by the Institute of Directors. Having been named the Emerging Entrepreneur of the Year in the Midlands Entrepreneur of the Year Awards, I am now through to the UK finals and have also been shortlisted for the Smith & Williamson Entrepreneur of the Year at the National Business Awards. I’m looking forward to being part of this year’s Growing Business Awards and hope to enjoy success once more. Chris Li?is the founder and CEO of?BathEmpire.com.