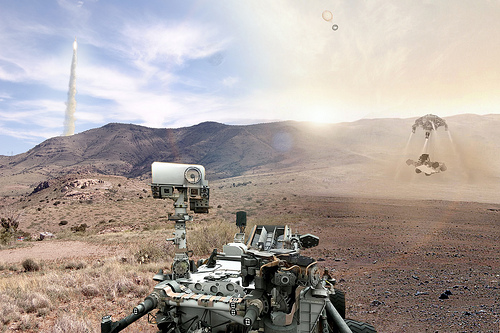 Share via
This project aims to encourage young people to take up careers in the UK space industry. The idea for the mission was inspired by the need to show how fun and diverse careers in space engineering and science (and other STEM subjects) can be to meet the government’s goal of quadrupling the size of the UK Space industry by 2030. This means the industry is going to need 70,000 new space engineers, operators and scientists in the next 15 years to continue the vital Space science and satellite work. New plans for a spaceport based in Newquay which has the longest runway should boost the UK space industry further. The students were set the challenge to come up with experiments for testing anything that humans might want to take or do on Mars in the future. All of the experiments had to fit inside a toy capsule and were mounted onto a special tray beneath the balloon to maximise their exposure to the hostile environment, before being carried 30km up into Earth’s atmosphere on a high altitude balloon named Tharsis. They experienced temperatures as low as -50°C, pressures of one per cent of that at sea level and increased levels of radiation; conditions which are very similar to that of the surface of Mars. The next MARSBalloon launch, named Elysium after another Martian volcanic region, is planned for mid-October and there are still plenty of spaces available. UK secondary school teachers interested in entering their class or club into this flight should register on the project website. The experiments recovered from both Tharsis and Elysium will be returned to the students who made them. They will be encouraged to write up their scientific results for publishing on the project website. Image source By Shané Schutte