No longer do entrepreneurs have to save or head down to the bank when in need of capital, helped by the rise of alternative finance mechanisms.

Indeed, a perfect example of this was shown when Real Business spoke to users of travel and accommodation platform Airbnb and discovered that it was providing funds for savvy hosts to open their own businesses.

Crowdfunding is also a popular channel for raising money, demonstrated to the masses as Crowdcube powered a campaign that helped the Caterham F1 team finance a trip to the Abu Dhabi Grand Prix.

Now, for another another slightly controversial crowdfunding story. Gay Lithuanian film director Romas Zabarauskas has succeeded in pocketing $20,886 for his latest independent production after promising those investing more than $50 a signed nude photo of himself in exchange for their cash.

The film’s synopsis is as follows:

“You Can’t Escape Lithuania is a feature film about a fictional version of Romas Zabarauskas, a gay filmmaker from Lithuania.

“Romas helps a good friend, an actress, Indre, to escape Lithuania after she murders her mother and steals her money. Romas also takes his hot Mexican boyfriend Carlos along for the ride.

“On the road, Romas gives Indre an ultimatum: if she doesn’t agree to perform in one last experimental film, he will turn her over to the police…”

He launched the Kickstarter campaign on 3 November and reached his $20,000 target on 3 December, just before the 4 December deadline.

A $50 donation was far from the most expensive item on the list, however, with a $3,000 contribution providing investors with “Executive Realness” – comprising an associate producer’s credit, signed cast and crew film poster, postcards, digital downloads and, of course, the nude picture of Zabarauskas. All three available were sold.

At a slightly lower investment of $1,000, the “Sugar Daddy” package would provide the aforementioned merchandise and a dinner with the director in Vilnius, Lithuania “or elsewhere if you cover the travel costs.”

In other alternative funding news, actress Sadie Frost has launched a crowdfunding campaign with a target of £150,000 for her new film project. This type of development supports research that says the UK alternative finance market is predicted to reach £1.74bn by the end of this year. 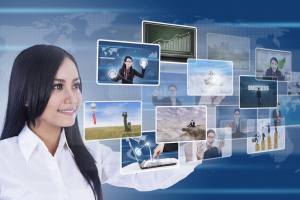 China named a rising force in the digital media business