Over 650 small businesses and authors attended the event at the SEC Centre in Glasgow to learn how to grow their export sales, how to boost their productivity – and for authors, how to self-publish and reach a global audience.

SMEs, entrepreneurs, and tech start-ups from across Scotland came to Amazon Academy to hear from independent experts including Emma Jones MBE and Founder of Enterprise Nation, Parveen Thornhill, Regional Director, Department for International Trade, as well as three small business owners who told their own stories of how they have boosted embraced e-commerce to successfully sell their products to customers across the world. The event was also broadcast live to enable small businesses in rural and remote areas benefit from the day.

As our biggest ever Amazon Academy audience gathered to hear from these experts and inspirational entrepreneurs, it wasn’t difficult to see why we chose Glasgow as the stage for our first Amazon Academy this year. As Scotland’s largest city, it boasts one of the UK’s most vibrant and dynamic economies outside of London, perfect for finding and developing the next generation of Amazon entrepreneurs.

Glasgow is considered by many to be the powerhouse of the Scottish economy – the beating heart of Scotland, with notable cultural, sporting and academic prowess. More than 25 years since Glasgow was named European City of Culture, it continues to grow as one of Europe’s most vibrant and cosmopolitan cities.

As a local economy it is rich and diverse, hosting nearly a third of all Scottish companies and supporting a slightly greater proportion of Scotland’s jobs. It is also now one of the UK’s leading tech hotspots outside of London. Following ongoing investment and regeneration, previously derelict areas of the city have now begun to pull in technology talent, and successfully marketed themselves as ideal locations for tech start-ups. That tech talent is, in turn, providing businesses with much needed and easily accessible tech skills to help them grow.

Start-ups in non-tech sectors are also booming. Glasgow remains Scotland’s number one start-up hotspot, according to Companies House, underlining a rich entrepreneurial spirit which characterises the economic culture of the city.

Of course, it’s difficult to establish a thriving economy without talented staff. With four universities and three higher education colleges, Glasgow is well established as a major centre of education and academic research. Glasgow’s young demographic (41% of the population is between the ages of 15 to 34) also makes for a bustling community of early adopters and technology enthusiasts.

Then there’s the quality of life. Nearly three quarters of Scottish SMEs (71%), as part of a YouGov survey commissioned by Amazon, recently cited Scotland’s good quality of life as the most appealing aspect of setting up and managing a small business north of the border. Scotland’s feel-good factor as a place to do business was further reinforced by the fact that nearly three quarters (72%) of the country’s SMEs think Scotland is a good place to set up and run a small business.

While the research did not drill down any further into specific cities, it is no secret that the quality of life in Glasgow is among the very best in the UK. As a city steeped in history, it boasts a distinct 19th-century Victorian architecture, complemented by the availability of green space. In fact, Edinburgh and Glasgow have more green space than any of the UK’s other 10 most populated cities. Glasgow’s is also known for having one of the largest retail hubs in the UK outside of London’s West End.

So when you add all these factors together, Glasgow presents a compelling case for entrepreneurs seeking a home to develop and grow their business.

Now it’s on to Newcastle on 5th June for our second Amazon Academy of 2018, where we will continue our drive to inspire and advise the UK’s next generation of SMEs, entrepreneurs, and tech start-ups.

Register here for your free ticket to Amazon Academy Newcastle.

10 dirty tricks to watch out for when negotiating 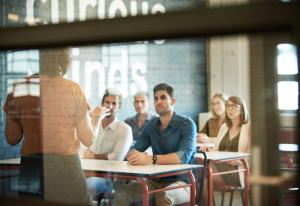