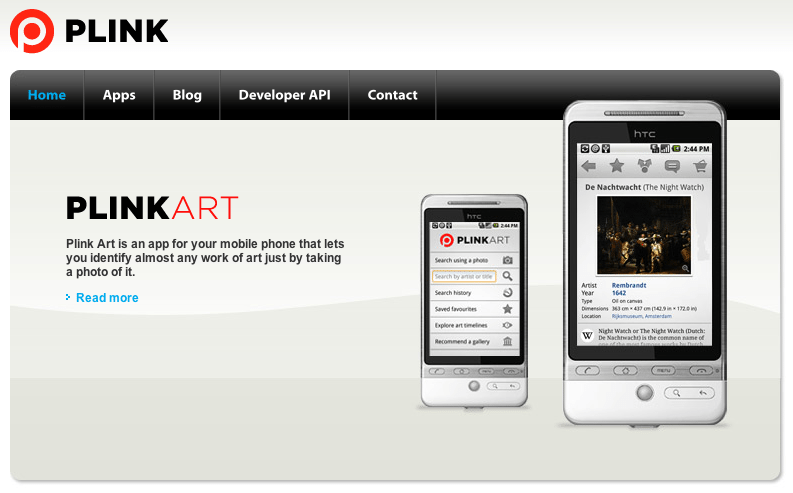 Plink’s first product is PlinkArt, a visual recognition app for mobile that analyses pictures of well-known artworks and paintings and identifies them. Users can then share the photo with friends and also click through to buy a poster version.

Since launching four months ago, PlinkArt has attracted 50,000 users. Plink, which was a finalist at Mini Seedcamp London, the competition for European startups, was recently awarded a $100,000 prize from Google after winning a public vote on the best reference app on Android, Google’s mobile platform. Although Google acquired Plink for an undisclosed sum, Cummins and Philbin will be charged with improving Google Goggles, a feature on Android that performs searches based on mobile photos of objects and logos. “It’s been a short but exciting ride – only four months since our public launch,” Plink’s founders say. “We’re looking forward to helping the Goggles team build a visual search engine that works not just for paintings or book covers, but for everything you see around you. There are beautiful things to be done with computer vision – it’s going to be a lot of fun!” Of course, it’s obvious to anyone that Google’s interest isn’t the PlinkArt application itself but, rather, the technology behind it. A possible business model would be for Google Android phone users to take a photo of, say, an item of clothing (or anything else) that you like, and then direct you to the nearest shop, or to an online site where you could buy the product immediately. Instant gratification could bring in the big bucks for Google.  This latest acquisition brings Google’s acquisitions to ten in the past six months, most of which have been in voice-recognition technologies and smartphone applications. “It’s time to be much more optimistic about the European tech start-up scene. There is a lot of innovation here and now the tech eco-system across academia, corporate, startups, venture capital and government is responding and supporting this effort,” says Anil Hansjee, Google’s head of corporate development for Europe, the Middle East and Africa.  Other recent Google acquisitions include: AdMob, Gizmo5, Teracent, AppJet, Aardvark, reMail, Picnik and DocVerse.