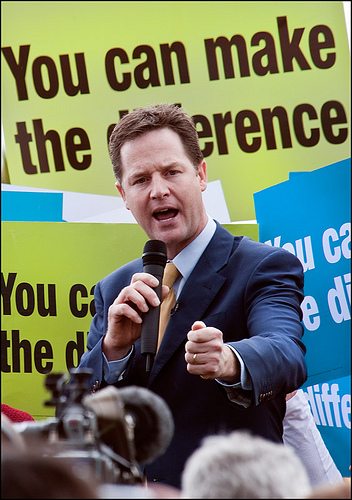 Deputy prime minister Nick Clegg has been outlining details of a £1bn regional growth fund to help areas particularly badly hit by public-sector spending cuts. The new fund, announced in Bradford today, will run until 2013 and will focus on UK regions most dependent on the public sector. Private companies and public-private partnerships will be able to bid for funding by “demonstrating that their proposal will bring in private investment and support sustainable increases in private sector jobs and growth in their area.”

The recurring theme of Clegg’s statement was around “rebalancing” the economy, away from the public sector and towards “sustainable private-sector jobs”. David Irwin, former head of the Small Business Service within the old DTI, said he hoped that a significant part of the regional growth fund’s focus would be on encouraging start-ups. “This has been a particular issue in the north-east”, said Irwin., where start-ups have had to pay Business Links for their support. As a result, start-up rates have fallen in the region. Among established businesses, “winners pick themselves,” said Irwin, so a key focus should be on start-up support. Kevin Nicholson, head of UK regions at PwC, said that London and the south-east are still likely to see highest rates of business activity, despite this fund and the National Insurance supported offered to regional businesses in the Budget: “The Regional Growth Fund due to run from September is good news however, filling the public sector spending gap in affected areas will be a challenge. We cannot assume that the reduction in public sector spending will be replaced by private sector activity. There will be significant regional variations and without some of the measures outlined in this budget, it is likely that much of the economic growth will be in London and and the South East.” Clegg also announced that new “local enterprise partnerships” will replace the regional development agencies (RDAs), which were scrapped in the emergency Budget. More details are to emerge on these new partnerships, which are likely to mean a bigger role for private regional bodies such as the Chambers of Commerce. Business secretary Vince Cable said:?We are determined to rebalance the economy towards the private sector, so it’s important we create a more effective structure to drive economic growth and development across the country. We want a structure that reflects the genuine interests and commitment of enterprise, local councils and other stakeholders like universities and colleges. Local enterprise partnerships will provide that vision and then take on the task of renewing local economies and tackling local barriers to growth.” Also announced exclusively to Real Business today, small business minister Mark Prisk revealed the fate of the Business Links. A green paper was also announced that will look into bank support for business, especially in areas dependent on public-sector spending.