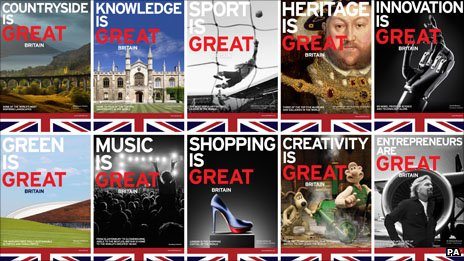 David Cameron launched the new GREAT advertising campaign at the New York Stock Exchange this Wednesday after flying into the US to address the United Nations General Assembly.

The government has spent ?510,000 developing the GREAT Britain brand, and it will be used by the UKTI, Visit Britain and the British Council to promote the country.? Cameron hopes it will bring in four million extra foreign tourists. The posters have been designed to sell “great” British attributes such as Richard Branson (naturally) and King Henry VIII. Cameron said at the launch: “Britain today is simply a great place to visit, study and work. A great place to invest and do business.” Really? Let’s look at the facts. Unemployment in the UK now stands at 2.51 million (that’s the the highest rate for two years). Inflation currently stands at 4.5 per cent (and it’s going up). And Britain?s economic growth forecast for 2011 has been downgraded to a measly 1.1 per cent.? Yes, there are many wonderful things about this country (not least its entrepreneurial spirit) but the government needs to get its story straight.? Cameron has been speaking about ?broken society, broken economy?; Vince Cable has likened the current financial crisis to fighting a war. The sudden attempt to re-market Britain as GREAT feels utterly inappropriate.? My view: great posters, horrendous timing.