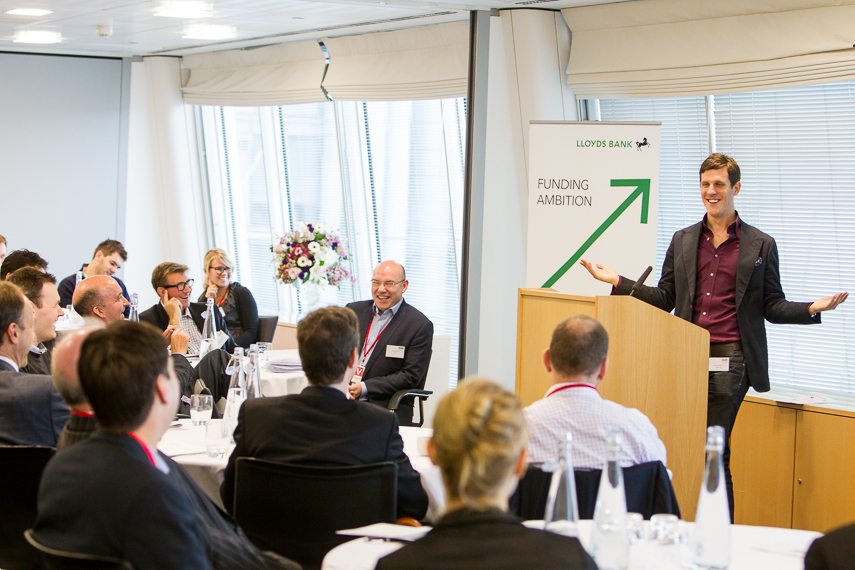 The shortlists for the 2012 Growing Business Awards, in association with Lloyds Bank, are among the strongest in the event’s 13-year history. Many candidates joined us for this year’s launch, where former “Young Entrepreneur of the Year” Dan McGuire (pictured) told his rollercoaster entrepreneurial journey – starting online recruitment business Broadbean at the age of 21; growing it rapidly; selling it to the Daily Mail in 2008; leaving in 2010; heading off around the world travelling (but returning after three months because he missed the feeling of “extreme purpose” that comes with entrepreneurship); founding Cube19 and, imminently, raising the finance to take it to the next level

In its coverage of the shortlisted candidates, the Financial Mail focused on Julie Deane, founder of Cambridge Satchels (and star of the Google Chrome advert!). The major trends observed by our high-calibre judging panel on interviews day included: the increasing internationalisation of mid-sized and smaller businesses; relentless challenges to established industries; and strong regional and community commitment among our entrepreneurial leaders and businesses. Many of these stories have been told in more detail over the past couple of weeks: Young Company of the Year
Made in Britain
Digital Champions
Innovator of the Year
Young Entrepreneur of the Year
Company of the Year (mid-sized)
Company of the Year (larger firms)
Export Champion
Entrepreneur of the Year Nurturing high performance
To support the development of Growing Business Awards candidates, in 2012 we introduced an exclusive partnership with McLaren Applied Technologies, which involves taking a group of candidates on an incredible “high-performance day” at McLaren in January 2013. Companies will get the inside track (forgive the pun) on how McLaren is bringing lessons (about real-time data and materials technology) into the world of mainstream business.  A delegation of Growing Business Awards candidates will also attend the CBI Annual Conference on November 19, where government and corporate leaders will be addressing the theme, “Forging a new economic future”. It’s all part of the Real Business mission to give growing mid-sized and smaller businesses the same access to the corridors of power as the biggest corporates.  Created by the CBI and Real Business in 1999, and held in association with Lloyds Bank, the Growing Business Awards are the UK’s most established recognition of entrepreneurial achievement. The winners will be announced at the awards ceremony on November 27, at the London Marriott Grosvenor Square. Hosted by Olympic legend and master-raconteur Steve Cram, this will be an uplifting night where you’ll share in stories of the best of British business; and celebrate your own achievements with your team.