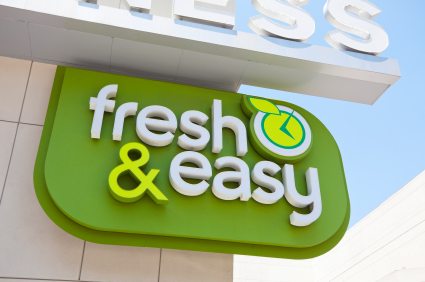 As one of the world’s biggest and most successful retailers, whenever Tesco is in the news, the world watches. But the latest on their under-performing US operation shows the giant’s wavering confidence in its ability to keep growing internationally.

Since launching its Fresh & Easy chain of convenience stores stateside, Tesco have failed to keep up with the established chains.

After years of failing to make a big breakthrough in the US food retail market, Tesco announced that it was to close all its Fresh & Easy stores in a move which could cost them an estimated £1.2bn. For a firm which seems to have marginally lost its shine, this represents a huge blow to its finances. However, could it prove beneficial in the long term?

Ditched at the checkout

Fresh & Easy has been viewed by many traders and prominent figures in the retail industry as a millstone around Tesco’s neck. At a time when Tesco’s pre-tax profits have fallen and sales growth slowed in Q4 to just 0.5 per cent from a healthier 1.9 per cent, getting rid of loss-making ventures could get the firm back on track.

After becoming the biggest name in the UK grocery market, Tesco set about expanding into other countries with varying success. Its move into Eastern European countries, such as Hungary, Poland and the Czech Republic, was successful until recently. Its Japanese operation performed below expectations.

Another issue that is affecting Tesco’s recent performance is their decision to write down up to 170 sites across the UK, earmarked for development of new stores. Although this will save them a little money in the long run, this may be music to the ears of Asda-Wal-Mart and Sainsbury’s, its two major rivals in the UK supermarket sector.

This move is expected to cost them £800m, while another £500m could be wiped from Tesco’s accounts due to current poor performances by its operations in Eastern Europe. Of the sites being closed down, roughly a quarter of them were in the development stage, which suggests that Tesco have many problems to address.

In their latest earnings report, the slow-down in sales growth within their fourth quarter remains a big concern, particularly when taken within the context of Sainsbury’s out performance over the December holiday season. Alarm bells will most certainly be ringing amongst shareholders should Sainsbury’s see a strong quarter of sales when they report to the market at the start of May.

A combination of failure in the US, sluggish sales growth and write-offs has hit Tesco’s outlook hard, something which has affected its share price. On the FTSE 100, Tesco is currently trading below the 370p mark, dipping from 388p just a week ago. Anxiety about the firm’s short-term problems may be sparking profit-taking amongst some of their more cautious shareholders after a strong rally in share prices from a low of 294.50p in June 2012.

That said, given the shocking profit warning of January 2012, Tesco is becoming more aggressive in wiping off under-performing areas of its operations to focus on core growth areas. This has seeded extremely well with frustrated shareholders and could help the share price to see heightened demand as long as sales continue to show Tesco have turned a corner.

After abandoning a huge number of sites and deciding to close Fresh & Easy for good, it seems that Tesco are trying to recapture past glories by getting back to what it does best.

What has served them so well during the last two decades was its focus on its core supermarket operation and cross selling footfall into higher cost non-food items, something that current CEO, Philip Clarke, would do well to bear in mind.

On the other hand, fending off competition in the grocery and non-food departments is something else Tesco will have to do.