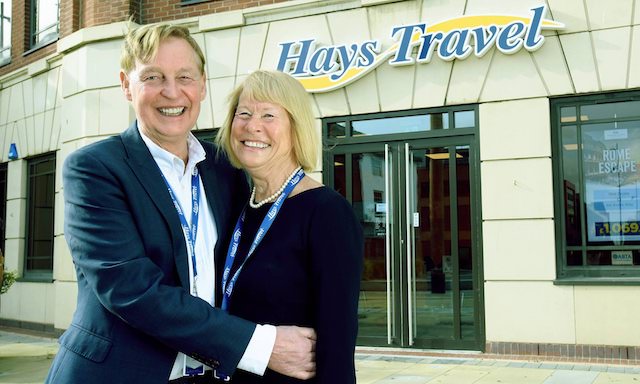 Share via
When trans-national package holiday agent, Thomas Cook, collapsed last month, the press was awash with tales of misery and paralysis from as many as 150,000 UK customers who were left stranded in various holiday locations. But, of course, it wasn’t only the defunct company’s customer base that was suffering from the event. It left as many as 9,000 of Thomas Cook’s UK employees without jobs, as the legacy travel company collapsed around them like a house of cards. [article id=”133465″ title=”The Thomas Cook collapse recap”] There was no transition period, simply a swift rollercoaster drop from operation to non-existence perpetrated by a black hole of debt that the company couldn’t ignore any longer. But then, almost as soon as we started despairing about the laid-off staff and how the abandoned Thomas Cook stores would add to our already bleak high street landscape, a husband-and-wife run (and an independent travel business to boot), have swept in to save both.

Hays Travel is a Sunderland based travel company that’s set to re-employ 2,500 of Thomas Cook’s UK staff and take possession of its 555 high street stores. Founded forty years ago by John Hays, he and his wife Irene have stated their?”intention to take on all the staff” from Thomas Cook’s UK workforce.

Last year, sales hit £379m and profits £10m. So, it seems the perfect time for Hays Travel to take that decent financial performance and gun for more growth via expanding their workforce and store presence.

But why is Hays taking on this defunct company’s store possessions and a number of its staff in a climate where customers are increasingly going online to book holidays?

According to the BBC, Hays Travel is using this opportunity to extend their store presence into regions of the UK where they hadn’t been before, such as areas of Scotland and Wales. What’s more, Hays Travel, despite a package travel market that’s being threatened by competitors offerings more flexible options to consumers online, (TravelSupermarket/HolidaySupermarket etc), the company has been doing well lately. Last year, sales hit £379m and profits, £10m. So, it seems the perfect time for Hays Travel to take that decent financial performance and gun for more growth via expanding their workforce and increasing their store presence.

‘A good deal’ from the administrators?

Even though we’ve not been told the disclosed sum Hays Travel bought the stores for, the fact they were purchased from the Thomas Cook administrators means it would have been a competitively priced one. So maybe the deal wasn’t all that really that risky for a company with decent profits in the first place But this might have been a clever deal as well as a cheaper one, with the BBC reporting that Hays Travel actually faced competition with other bidders to secure the stores suggesting that high street travel agents aren’t a dead dodo yet.

Painting themselves as an industry hero

At a time when Thomas Cook’s ex-boss Peter Fankhauser is offering his apologies for the company’s collapse whilst defending his payment of ?8.3m over the past four years as the company was spiralling into debt, Hays Travel publicised job rescues, store acquisitions and family-run branding looks set to secure their place as the affable and ethical travel brand in the UK. ” Will they stay this way in terms of public perception” Only time will tell… The partial Thomas Cook takeover will also result in the creation of more jobs, (as many as 100) at their HQ in Sunderland. The Hays Travel team have also made a concerted effort to encourage laid-off Thomas Cook staff to apply for positions with them, saying, “we have already recruited over 400 talented former Thomas Cook employees and we are ready to welcome many more of the retail branch staff,” according to their vacancies website.

However, some travel industry experts have come out and questioned just why Hays Travel, despite its decent economic performance, has acquired so many high street stores at a time when consumers are generally heading online to book and organise their holidays” Was it a cheap deal for a cheap deal’s sake Maybe not. There’s evidence to suggest that Hays Travel, despite its more traditional high street presence is a more nimble and agile business than Thomas Cook ever was.

A company without Thomas Cook’s burdens

For one, it doesn’t own any costly branded hotels airlines, cruise ships or an overly focused tour operating arm as Thomas Cook did. These heavy investments, when customer habits were undergoing such a massive seachange, acted as a giant financial albatross around the deceased tour operator’s neck. For the most part, Hays Travel seems to be a more focused company that’s putting most of its economic energy into providing a store based presence where customers seeking a ‘human-first’ approach to booking their holidays can go. Will they capture and retain this niche market via this new move We’ll have to wait to find out.