Jack Beaman and Novo Abakare have come a long way over the years, from friends of friends to flatmates, they’re now running a growing business with recruitment app Syft.

With an initial focus on the hospitality and events sectors, Syft makes it easier for companies to find temp staff, and at a lower than usual cost, while job seekers can find work instantly and receive a higher amount of pay than offered by traditional agencies.

“I used to work as a temp when I was at university, and I experienced frustrations around the small amount of pay and how long it took to get paid. Then I worked for a startup, so the idea came together from those two things,” explained Beaman.

Abakare was the missing piece of the puzzle to move the recruitment app from concept to business, as Beaman sat down with his roomie over Christmas and explained the idea, which resulted in him jumping on board with both feet.

“I was missing someone the carbon opposite of me. The minute we sat down and talked about Syft and realised we were going to go away and do it, everything else from there went extremely quickly. Before that, without a co-founder, it was slow work,” recalled Beaman.

Abakare said his reason for joining in, aside from believing in the idea, was that he’d always wanted to build something on his own outside of employment.

He said: “Everyone wants to build something. You hear ideas all day about people with an app for something, but Jack actually had a good one. Our aim has always been to make sure workers get paid fairly – at an average of £9.30 an hour. While we’re carbon opposites, we align closely to ensure workers get paid more.”

Abakare elaborated on how it’s possible to pay a high rate to workers, while offering employers low fees.

“Using the app and technology to streamline processes reduces overhead costs a traditional agency would face. We don’t just do all that for our own commission, we pass on the savings to the workers, which has enabled us to make sure the worker gets paid more than they would,” he said.

Beaman added there will be more revenue models as time goes on, but for now the main focus is on the commission. “Employers choose what they want to pay to the worker and we charge 15 per cent on top of that, which makes us cheaper than traditional agencies and it allows us to pay staff more. It’s a win-win in both scenarios really,” he said.

Find out how Beaman and Abakare responded to our quick-fire questions in the video below:

In August, the business secured a significant funding round of £2.65m, with a handful of notable investors. That handful included heavyweight boxer David Haye who was introduced by a mutual friend who works at Velocity – the restaurant app that this year secured $22.5m Series B round.

“One day he said why don’t you come to Victoria to meet the Hayemaker and we’ll see if he wants to invest. The next day he decided he wanted to, it was as simple as that,” Beaman said. “He’s a great investor for us and he’s brought the O2 Arena in. He’s hugely influential.”

He admitted though, that it’s the other Syft investors he feels star struck by these days. They include David Cameron’s former enterprise advisor Lord Young, Concerto Group founder Mike Kershaw, as well as Profounders Capital and founders from Gamesys, CloudVolumes, as well as Velocity.

With recruitment app Syft, the inspiration to launch in the hospitality sector in particular came from Beaman’s stints as a waiter in Greece and bartender in Bordeaux, but there will eventually be a launch into other industries.

“I’ve worked in hospitality and have friends in it, so it was the first area that made sense. From a business perspective, it felt easier to make an impact in that area, and I’m sure we’ll go into other sectors as we grow,” he said.

“We’re at the very early stages of hospitality still, so it would be silly to think we’re ready to go and do something else now. But there’s a huge market out there for us in a number of different sectors, and we will do them at some point.”

To that end, there’s a game plan to underscore the performance of recruitment app Syft and its ability to truly make an impact.

“What we need to do in the next few months is continue to expand out across London and essentially prove we can replicate this across every city we decide to go to,” said Beaman, referencing Manchester and Birmingham as potentials.

“That way we can can say [to investors] ‘look, we’ve launched in a certain sector in London, and we’ve got a playbook on how to do it’. Then we can replicate across other cities in the UK or whether it be in foreign markets as well.”

London Cabaret Club: Entertaining locals, tourists and Simon Cowell with a made in Britain brand 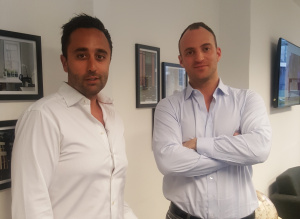