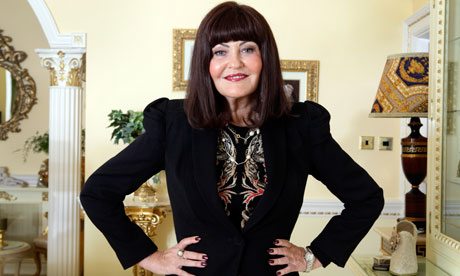 Share via
Bolton-born Hilary Devey is to join the BBC’s Dragons’ Den, replacing James Caan. She will be joining current dragons Duncan Bannatyne, Theo Paphitis, Peter Jones and Deborah Meaden. Hilary Devey founded pallet delivery and distribution business Pall-Ex in 1996, despite initially being unable to secure backing and having to sell her house and car to find the £112,000 needed to fund the operation. The Pall-Ex HQ – located near Coalville in Leicestershire – now receives as many as 17,000 pallets of goods a day, filling up to 350 lorries which then transport the freight to regional depots throughout the country. From there, approximately 100 of Pall-Ex’s member hauliers share the delivery of goods to their final destination, including Asda supermarkets, making big savings in duplication and transportation of pallets. Hilary Davey’s business pulls in sales of more than £100m. This year she plans to launch a national courier and package delivery firm for the corporate market called Pronto Sameday Couriers. The 56-year-old will be a great addition to Dragons’ Den – Hilary Devey is well known for her “combination of down-to-earth grit coupled with an extraordinary business mind”. Commenting on her new role, Hilary Devey says: “At a time when the banks are failing to invest in British small businesses, I am proud to be able to do my part to support the next generation of UK entrepreneurs. “In order to set-up Pall-Ex in the mid-Nineties, I had to sell my house and car to get the start-up capital necessary to fulfil my business ambitions, as none of the banks appreciated my potential. I would have loved the opportunity to have stood before the Dragons, and I will remember my own experiences and the realities of running a business today, when choosing to support – or reject – the budding entrepreneurs joining me in the Den.” The the larger-than-life entrepreneur has previously appeared on other TV shows, including Secret Millionnaire and The Business Inspector, where she helped struggling British businesses – one man bands, kitchen table entrepreneurs and struggling firms – by injecting business sense into their projects. Hilary Devey is replacing James Caan, who announced he was leaving Dragons’ Den last month. At the time, James Caan said that he was ruling himself out of the next series of Dragons’ Den due to an increasingly busy work schedule and his commitments to his philanthropic activities in Pakistan. Hilary Devey could have her work cut out: the BBC has recently also confirmed that Dragons’ Den has been commissioned for a further three series. With average audiences of over three million people per episode, it’s a winner. It’s great to see Hilary Devey join Dragons’ Den – not only is she a fantastic character to have onboard, but it’s nice to see another woman join the Dragons’ Den panel. What do you think of the BBC’s choice? Is Hilary Devey a good addition to the Dragons’ Den panel?