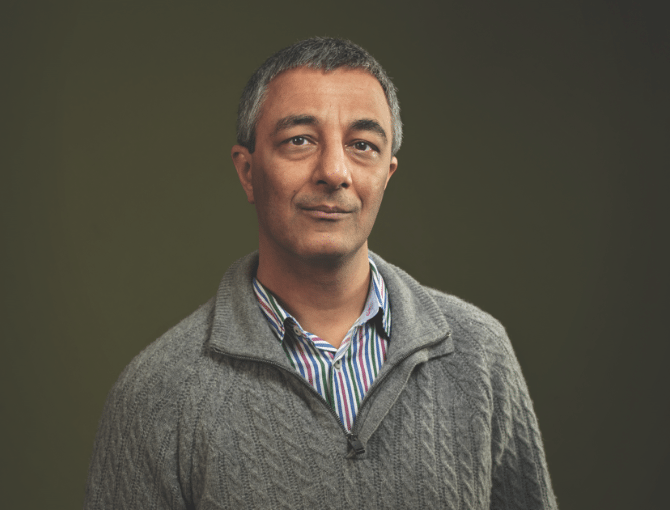 Company name: Alternergy
What they do: Green and solar energy
Headquarters: London
The boss: Rajiv Bhatia

Not many people can claim to have worked with both Richard Branson and Alan Sugar (sorry: Sir Richard and Lord Sugar). Not many people have the bragging rights of being the founder of the UK’s fastest-growing private business. But Rajiv Bhatia can put both of these on his CV.

Here’s an unconventional route to the top of the Real Business Hot 100 – our 15-year-old ranking of Britain’s fastest-growing private companies. Start out as a tax consultant. Throw in a stint at the grand Holland Park mansion of Richard Branson (including the launch of Virgin Active) and an all-too-brief spell with Alan Sugar at the height of the dotcom boom in 2000/1. Lose money on a business venture. Do some consultancy projects. And then start up in the solar power industry. Speak to Rajiv Bhatia, though, and he makes it sound believable – normal, even.

Alternergy, Bhatia’s company, is a rising star in the solar firmament. It’s one of the principal wholesale/distribution companies in the sector, and it is cannoning along at a compound average growth rate of 130 per cent. If your house or office has solar panels on its roof, there’s a good chance that they were supplied through Chiswick-based Alternergy.

But this is not the build-up-a-new-age-empire story of an environmental zealot. It’s not even the story of a green-minded technical guy making good. A Bombay schoolboy and Delhi undergraduate, Bhatia’s career began with PwC as a tax consultant where he learned about structure, organisation and the merit of getting things down on paper. And then he worked for Virgin Group, initially on the boring but important topic of indirect taxes before branching out into something more interesting – which turned out to be corporate finance and business development. And after that, he had a short but ill-fated post with (the-then-just-plain-old) Alan Sugar as he dabbled in the dotcom boom.

That didn’t last long, and the early part of the new decade were Bhatia’s wilderness years, trying both consultancy and his own business ventures. Nothing particularly shone but it did stir his interest in renewable energy generally – and solar PV in particular. “I first learned about it in 2002. I was doing some consultancy and working on my unsuccessful business at the time. I should have dumped that then!” But it took another four years before he took the plunge.

In 2006, the solar PV sector was still a nascent one. Strategically, Bhatia could enter the market as an installer, a manufacturer, or a wholesaler/distributor. One involved plenty of time on rooftops; one was complex and capital-intensive; and one was a fragmented market with just one dominant player. Besides, he had no capital. He had lost money on a previous business venture and didn’t want a further mortgage.

The wholesaler/distributor route enabled him to travel light. “I outsourced everything. I wouldn’t even see the goods; they would go straight to the customer.” One early lucky break was winning a distribution contract with Sharp, who were looking to expand their network. “Sharp had to work with some small companies because there weren’t many large-scale distributors around. I had a strong business plan and a good presentation to make.”

From July 2007 to November 2009, Bhatia did everything. He worked from home and was a sole trader – on steroids. “I did the accounts, the invoices, the purchasing. I wrapped and lifted the pallets. I took orders and sorted out deliveries while I was out with my kids in the park. I sorted out the paperwork at 5.30am at the weekends.”

The government announced its scheme for Feed-in Tariffs (FiTs), with tasty subsidies for solar PV installations. In April 2010, the scheme was introduced. The aim was to encourage more small-scale, low-carbon electricity generation by individuals and organisations. With a guaranteed payment for generating the electricity, as well as a guaranteed payment for any surplus electricity exported back to the grid, the arithmetic was compelling. The Energy Saving Trust reckoned that a domestic solar-energy producer could make a household £1,200 better off.

Unsurprisingly, the demand for solar PV rocketed. And it underpins the growth that has put Alternergy at the head of our Hot 100. Turnover raced to £20m in 2010/11; this year, Alternergy is on target for £50m. Bhatia had four employees on his books in July 2010; by the autumn, he was recruiting every month (current headcount stands at 22).

In a burgeoning market, with many new suppliers and customers piling in, Bhatia sees one thing as central to building Alternergy’s reputation: “We won’t cut corners. We have axed suppliers on account of their behaviour. We really try to be good payers. Our integrity as a company is massively important. And we’re told by so many people that they see and understand that.”

The company is debt-free. There are no external investors. Lloyds Bank has made a chunky invoice-finance facility available, which the company dips into from time to time. But there’s little likelihood of Bhatia stretching his finances. “When the company started to grow, I just ploughed everything back into it,” he says. “I didn’t immediately buy a big car; I didn’t change my lifestyle. I just wanted to grow the balance sheet.”

The same caution applies to the way he runs the business. “We don’t have any leases,” he says. The warehouse space is on short notice; the warehouse staff are outsourced. The office is based in a business centre in Chiswick, west London. “You might pay a little more but we have moved five times within the same business centre. We can be flexible and we have no fixed overheads.”

He’s been wise to be prudent

Just as the market for solar PV installation rocketed in 2010/11, it could easily whipsaw in 2012. Again, the reason will be government action rather than market demand.

In December 2011, DECC announced that it was cutting the subsidy for FiTs. Instead of receiving 43.5p per kilowatt hour of electricity generated, users would get 21p.

It was an utterly unexpected announcement. Bhatia was at a trade exhibition when the news came through. “It was a swingeing cut and I don’t think it was thought through properly,” he says. The trouble was that the government’s policy had been too successful. The FiTs had been funded via a levy on consumers’ energy bills; if solar installations were to carry on unchecked, the bill was going to get very expensive. (The scheme had had an original budget of just more than £1bn; it has currently cost £1.7bn.)

The result was a mad dash to get solar panels installed before the tariff reductions. “We had a crazy few weeks,” Bhatia recalls. “I don’t think any of us have ever worked so hard.” The industry saw a massive spike: “For just one month, we operated as a quarter-billion pound industry,” is how Bhatia puts it.

There was a frenzy of lobbying (although Bhatia is not particularly complimentary about his local MP’s lack of interest) and a successful appeal against the speed of the government’s initial timetable. The deadline for qualification for the original 43.5p tariff was extended until March 3, with a further tariff reduction in July, to somewhere between 13p and 16p.

The upshot, as far as Bhatia is concerned, is flux and uncertainty. “We just don’t know what will happen,” he says. For a hard-charging company that is focused on building its market share, it is quite a pot-hole to hit. “I couldn’t tell you whether the market will grow, shrink, or stay the same,” Bhatia sighs.

If government policy decisions represent the greatest potential pitfalls for Bhatia, another concern is the attitude of financial institutions. Despite solar PV installation costs tumbling, it is still not cheap. Will the banks and building societies be willing and able to lend to households while FiTs  decline? Bhatia isn’t sure.

Still, you can’t help but think that this is a company in the right place at the right time. Solar power is on a growth trajectory. The industry – and Alternergy – had been growing before the introduction of FiTs. And, despite having less generous incentives in place, the government has also committed to £2.2bn in tariff subsidy payments lasting through to 2015 – two and a half times the original budget; it also stepped back on a proposal to allow panels to be installed only on the most energy-efficient homes, rated “C” or higher. It will now allow for panels on “D” rated homes, expanding eligibility to nearly half the homes in the UK.

In the long term, the government is making some bold projections about the growth of solar power. By 2015, it reckons that some 625,000 households will install solar panels. By 2020, the government believes that 22GW of installed power will be solar – that’s the equivalent of ten modern power stations, and more than 20 times current capacity. These are considerably larger figures than had been originally projected by DECC.

The technology continues to develop. It’s light, not sunshine, that really matters for solar PV. Can those old jokes about Britain not having enough sunlight. While silicon is the mature technology and continues to deliver incremental improvements, alternatives (and their game-changing possibilities) are always being tried out.

In the UK, Alternergy has still got a lot of market share to seize. Bhatia reckons he currently has five to six per cent of the total market and puts his company in the top three. And there’s always India. “It has always been at the back of my mind that solar PV would be a fantastic opportunity in India – if the technology was affordable,” he says. You get the feeling that the Bombay schoolboy would love to crack that particular market. In the meantime, there’s his domestic situation to address: his own home doesn’t have solar panels because the south-facing roof space isn’t large enough. Er, Rajiv, you’re the founder of the number-one company in our Hot 100. Fancy building an extension?

You can meet many of the Hot 100 at the 2012 Entrepreneurs’ Summit, in association with Investec and supported by the CBI, on June 13, 2012. Keynote speakers include: Travelex founder Lloyd Dorfman, business secretary Vince Cable, Kelway founder Phil Doye and 20+ more speakers. Book here or contact Silvia Natalicchi on silvia.natalicchi@caspianmedia.com