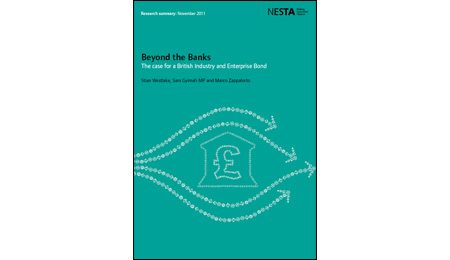 Share via
Ask most UK citizens about what they think about banks, and they’ll grumble. Ask most business people about the banks, and they’ll say that they’re not lending. Ask the banks, and they’ll say there’s insufficient demand from businesses for loans. It is, frankly, a stale debate. It also asks the wrong questions. Which is why today’s Nesta report, ‘Beyond the Banks’, is so helpful. At last, as Real Business has long been calling for, we’ve started to discuss whether our banking system is fit for purpose in a new, debt-averse, digital era. The main conclusion of ‘Beyond the Banks‘, written by Sam Gyimah, Stian Westlake and Marco Zappalorto, is that we must consider wide-scale credit easing, underwritten by the government. “We propose that the government buy up banks? loan portfolios and finance these by issuing securities ? a British Industry and Enterprise Bond ? to investors.” Nesta maintains that there’s strong investor demand for such bonds. “Just as importantly, it would help address a more structural problem of the UK financial system: its dependence on a relatively small number of banks and the relatively small size of non-bank lending options.” Views will differ on the idea of SME bonds. There are strong arguments that this is a business subprime problem in the making. Nesta’s truly significant conclusion, in our view, is the lack of competition in the market. As we will be arguing strongly in the next few weeks, is that this financial crisis is not about cash; there’s plenty of that about. The problem is actually a misallocation and distribution issue: available capital is either in corporate bank accounts; propping up bank’s reserves; or in inefficient public-sector assets (ie, huge university estates etc etc). Patrick Murray, principal at the FD Centre, for example, lobbies for a new high-street network of SME-focused banks. My problem with this is that technology is currently dramatically under-used by our financial services providers. More branches ain’t the answer. Sweeping digital disruption is under way (to be fair, the banks themselves are at the forefront of digital delivery). It’s no coincidence that mobile payments pioneer Monitise was the winner of our Entrepreneur of the Year award earlier this month at the Growing Business Awards. Revolution is in the air. Those who have issued SME bonds rave about them. Will King, CEO of King of Shaves, has been characteristically animated on their effectiveness. Today he welcomed Nesta’s recommendations. “You can bypass banks by a) putting in place a direct to company Enterprise Bond between HM Treasury & SME, three to five year term, five to seven per cent coupon, checked by independents (ie accountants, existing lending banks, business plan) as well as government taking over loans to SMEs from banks (85 per cent) leaving them 15 per cent exposed (per term of old DTI Loan Guarantee Scheme) and companies repaying per ‘Student Loan’ repayments. “And b) putting in place an HM Treasury backed Invoice Discounting facility (as supplied today via banks, and then getting money quicker to companies than payments made by their customers.” The debate should not be about whether the banks are lending, but about how the banking sector transforms itself (and welcomes new players) so that it really is fit for the 21st century.