A wholly disrupted way of doing business is in fact arriving in the next 50 years, according to new research from Zurich.

Expect new business models, communication based on telepresence, and working from home as the new normal. Imagine a large presence of robotic workforces, driverless commercial fleets, and trading in a globalised currency.

These predictions raise questions from an operational, societal and risk-management perspective. But most of all, they’re rather exciting.

The high street as we know it will transform completely in just eight years, being replaced by online purchasing, the research predicts. Already, some 70 per cent of SMEs questioned by Zurich (the research involved over 1,000 respondents) believe traditional high street businesses must radically change their customer experience to compete with digital shops in 2020.

We’re still in the early stages of the virtual high street phenomenon; and subsequently, entrepreneurs are associating all kinds of risks with conducting their business online. Nearly a quarter say they would be concerned about the lack of customer interaction and loss of personal relationships; others fear cybercrime.

Small and mid-sized businesses have predicted a similar outlook for the future shape of their company. Many believe that traditional business centres will disappear within 50 years, and 24 per cent of business leaders expect traditional distribution, such as freight vehicles, to vanish.

A workforce of the future

Can you imagine your whole workforce to be working from home? Compared to only 27 per cent of the SME workforce that is working from home today, that seems like a big change. But many believe that is the near future and, subsequently, expect that by 2062 people will no longer commute to work.

Having their team working from home will have a significant impact on any organisation – 16 per cent of Zurich’s respondents went so far as to say that it will have changed the very nature of their business in 50 years.

While becoming a nation of home-workers, the UK workforce will also be working later in life. Nearly two thirds of SMEs see the ageing workforce as an opportunity for their business to retain talent and experience, compared to only 21 per cent who stated it would be too risky to employ an older workforce.

Inevitably, methods of communication will also change. The research uncovered a dramatic shift in the ways we are set to communicate in the short-term (eight years) and long-term (50 years). For example, respondents viewed email as the primary tool for communication in 2020, but expect their use to halve by 2062. Instead, emerging communication technology – such as telepresence – will prevail.

When looking at trading in the global economy, some of the biggest challenges to British SMEs today are foreign trade laws and regulations. As the online business community continues to evolve, however, international trade laws and sanctions are likely to be liberalised by 2062. Particularly because trading internationally will increasingly not require physical presence.

Coupled with this, it’s predicted that SMEs will be trading in one globalised currency in the future.

When will 3D printing finally reach the mainstream? If we trust Zurich’s research, we’ll all own a 3D printer eight years from now, allowing us to order and print goods from home. Coupled with the virtual high street, this gives us a glimpse of how retail will be turned upside down.

Robotics will soon give us a hand in delivery, services, and retail. Zurich predicts that shops will be un-manned, and replaced by robotics, and the products of the future will be transported via driverless fleets in 50 years. Artificial intelligence (AI) software programmes and services will play a critical role for SMEs, eventually become our trusted workplace advisors.

Are these predictions exciting? Scary? Or simple unlikely? Do share your own visions of a brave new business world in the comments. 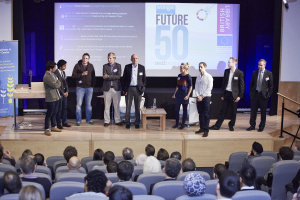