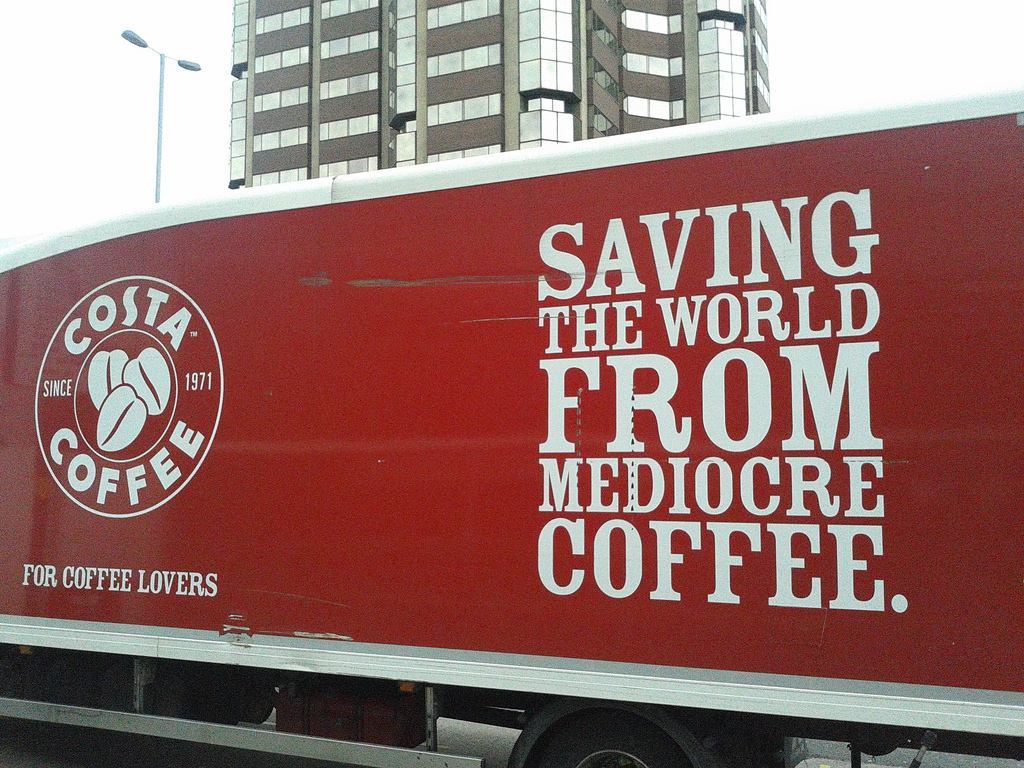 Share via
A BBC investigation has ruined the lives of numerous commuters, specifying what exactly has been in some of the quickly-ordered cool drinks that became popular when the mini-heatwave struck. Faecal coliforms, the company’s Watchdog series explained, were found “in varying levels” in ice cubes across Costa, Starbucks, and Caff? Nero chains. Needless to say, the three took some reputational damage. While?Starbucks and?Caff? Nero tested positive three out of ten times in tests carried out by the show, faecal coliforms were present in seven out of ten Costa samples.? ?Coliforms are an indicator of faecal contamination,?meaning?anything which is in faeces could be in that ice,? Rob Kingsley from the Quadram Institute Bioscience told The Guardian. ?It is an indicator that somewhere there has been a?breakdown in hygiene or the source of the water used for this ice.? The question is, how do the companies combat the resulting reputational damage? ?All businesses have different worst case scenarios for PR and reputation crises, and these generally break down into five key categories: safety, security, financial, environmental and legal,” James Bickford, managing director of Reputation Institute, told Real Business.?”Most long-lasting crises will impact two or more of these categories.” ?In this case, the faecal bacteria found in coffee from Costa, Starbucks and Caff??Nero hits the companies both financially and in terms of health and safety. Despite the longstanding reputation of the three coffee chains, this revelation presents a serious risk to the reputations of the companies.” In such cases, he explained, customers were?more likely to forgive and forget a company with a good?track record. “We have seen this recently with companies like Volkswagen and Samsung ? they spent years tackling reputational damage and have therefore been able to recover very well. In time it will become clear which of these coffee chains have invested sufficiently in their reputations and which will suffer long-term.?

His words reflect research the company undertook, highlighting the better the reputation, the more support a company got through its time of crisis. It found that for companies with an average reputation, only 23 per cent of customers would buy products. In comparison, those with an “excellent” reputation saw buying support increase to 77 per cent. Beattie director Chris Gilmour explained that?a meaningful demonstration of what was going to?change was needed to win back customer confidence. “Starbucks and Caff? Nero are claiming to?currently be investigating ? but the market wants to see actions are being taken. This response is too wishy washy. Costa has played this perfectly by stating it is?introducing new handling procedures.” The chains should?take advice from Cadbury’s 2003 mishap in that respect. After finding worms in two of its bars, Indian authorities seized the company’s stock. It was slow to issue a response, which didn’t bode well with customers. Its saving grace though came in the form of a package change. As Gilmour explained, customers want to see actual results, though initial words to address the situation will help calm the storm. Cadbury’s took steps to change the packaging of its Dairy Milk offering, investing a higher price than previously, without adding extra costs to the actual product. ?So if handled right,”?Gilmour said.?”This will be a storm in a coffee cup ? the?reputational damage?will blow over and everyone will be talking about something else next week. “The coffee chains need to be as open and transparent as possible in their response, and give visual demonstrations they are working hard to prevent bacterial infection. Having staff wear sanitised rubber gloves and wash their hands before dealing with icy drinks, would be a good start.” Likewise, Igniyte managing partner Simon Wadsworth?claimed it was?critical for each company to acknowledge the issue and share any plans being made to ensure customer safety and satisfaction. “As with all crisis situations, communication is key,” he said. “Because this is a very consumer-facing issue, utilising social media is a great way to speak directly with those most concerned about the issue ? the brand?s customers. “Costa, for example, in addition to maintaining its highly responsive Twitter feed, has responded to user concerns directly via Twitter while also directing people to the official statement on the brand?s website.” The brands better start taking to social media as customers are pretty vocal about the event, with these being the more mild-mannered finds:

Wish I hadn’t looked at why Costa was trending.. pic.twitter.com/YenRG66NDg

Board members at Pret reading THAT BBC article about Costa, Starbucks and Nero this morning pic.twitter.com/OoBSVBVqXZ

He added: “The benefit here is transparency and being able to address the people who are most concerned with the issue directly. Continuing to acknowledge this situation publicly will help reassure people that, not only is the company aware, but cares about its customers and isn?t shying away from its responsibility.”