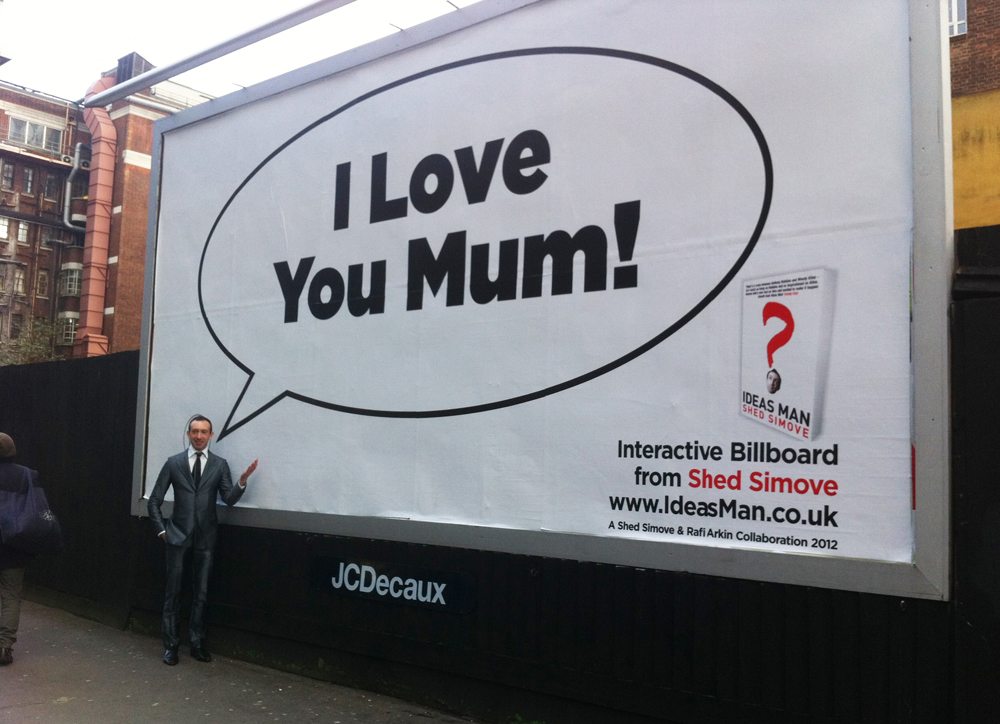 His eyes lit up. “Shed…that’s fantastic!” he said, much to my huge excitement, and relief. Whenever someone else thinks your idea has merit, especially someone very clever and talented, it always gives you such a boost of energy to make it happen. Rafi asked me at what stage I was at with the idea and I replied that so far, I only had the idea, but not much else. And that’s a situation many of us find ourselves in every day.

I explained to Rafi that I believed the best way forward was to contact a high up executive in the billboard industry and persuade them that my idea had merit. Rafi paused, and then uttered the magic words that instantly made him my “Ideas Fairy Godfather”. “Hmmm…maybe I can help, Shed…”, he said.

The next day, Rafi put me in touch with the top guy at billboard giant, JCDecaux. I called the guy up and explained my concept, hoping he’d like it. Instantly, he said he loved it. He then called back a few hours later and said that for my budget, he could rent me one billboard somewhere in London, and also that he’d move heaven and earth to find me a good site in time for Mother’s Day, which was fast approaching.

I was elated at this brilliant turn of events, but I still had no design – or indeed, no actual poster to stick up. I turned to my “Fairy Godfather” Rafi and once again, he swung his massive magic wand (if you’ll pardon the expression). Rafi told me he knew a brilliant designer called Nic, and over the next few days, we created the design for the giant poster. A big challenge soon reared its head. None of us knew whether the “person outline” we’d placed on the billboard design (to show people where to stand) would actually be in the right position or at the correct height. The only way to be totally sure was to post the billboard. I nervously approved the final artwork, rolled the dice and sent the design to the billboard company.

Three days later the big-wig at JCDecaux called me. He told me that the billboard was being printed later that day. Then, he said something that took my breath away. “Shed, we’ve got you a site for your billboard on Grafton Way, off Tottenham Court Road, in central London…”. Bloody hell! Wow! Incredible! A site that was next to one of the UK’s busiest roads! I spluttered my astonishment and gratitude…“Awesome…thank you so much…”, I said. It seemed my billboard dream might really come to life – and in style too.

At this point, I hurriedly (but carefully) registered the design for my interactive billboard and filed off the necessary trademarks to ensure I protected the concept. The next day, I received an email from JCDecaux which said simply, “It’s up!”. I re-read the short message, not quite able to take it in. What?! No way! Was this true? I called them up and was told that my billboard been rushed through the system in time for Mother’s Day and posted in the early hours of the morning that day. This was wonderfully thrilling news and I couldn’t wait to actually see it in real life. I quickly rearranged some meetings and hot-footed it down to Grafton Way in Central London. As I turned the corner from Tottenham Court Road, I was met by a stunning sight – there was the billboard, bathed in sunlight and ENORMOUS. It was a very special and exciting moment.

I quickly rushed over to the bottom of the billboard to check the positioning of the “stand here” outline. It worked. Phew! For the next couple of hours, I proudly stood next to the billboard, taking photos, and watching people stop as they spotted it. The response was fantastic.

A wide selection of people crossed the road to have a closer look at the billboard – ambulance workers, cab drivers and businessmen, to name but a few, all came over to have their photo taken in front of the billboard. We even had a group of glamorous babes from “Spearmint Rhino”, a Gentleman’s Club located around the corner from the site, visit the billboard as well. Lapdancers love their Mums too.

As people took photos of themselves and their friends in front of the billboard, they frequently told me they’d be sending the pics to their Mum, and also that they’d upload their images to their social networking sites as well. I got home later that evening and posted the photos on my Facebook page – immediately they stated getting shared and “liked”. The next day, I had a couple of enquiries from journalists wanting to talk with me about the idea and wanting to feature it. The ball was well and truly rolling…and the virus was out of the lab…

My hope is now that Advertising Agencies around the world will work with me to roll out different versions internationally. I see this working for many phrases, including, “I LOVE YOU DAD!”, “MERRY CHRISTMAS”, or even “I ADORE COKE!”. Plus, I’d love to see one that says, “NO ONE KNOWS THAT I’M NOT WEARING ANY UNDERWEAR”.

My billboard success also proves that you can have an enormous impact for a relatively outlay, by thinking creatively. You need to think up something original that people will engage with and team up with talented experts who can help make your idea happen.

For the cost of one billboard, I’ve managed to reach millions of people and spread a little happiness too. Not bad for a small budget and a few days work! Plus, my Mum says she thinks my billboard is ‘Fabulous’…which really, is the most important point of all.

Find out more about Shed at www.ShedSimove.com and add him on Twitter and LinkedIn. Shed’s new book, ‘Success – Or Your Money Back’ is released this October by Hay House.