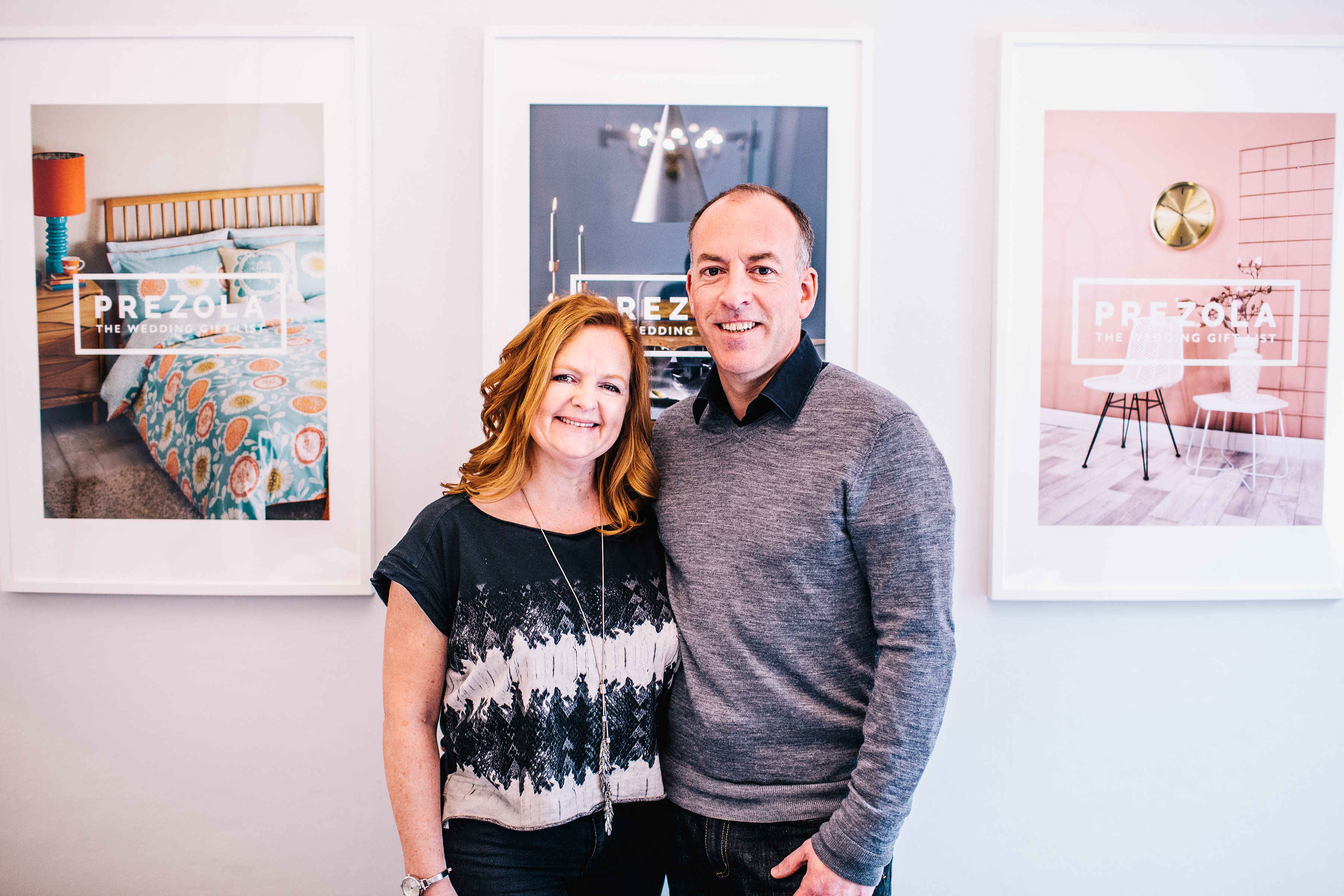 Share via
“It was one of my wife Ali’s birthday presents. It was a nice doll, but she was nearing 40 so it didn’t make her day,” recalls Prezola CEO Dom Beaven. “We went out for a meal, had some wine and started talking about how great it would be to put your favourite things from your favourite shops in a gifting list. “We decided that night that if we were going to start a business it would work best for weddings and engagements. Before the evening had finished we had registered the name Prezola.” The husband and wife co-founders were full-time professionals before falling in love with entrepreneurialism. Dom had been head of digital and social media for Comic Relief and managing director of media group Future Publishing. Ali was a qualified interior designer. “We resigned from our jobs and set up Prezola during 2010, appropriately enough launching the site on Valentine’s Day in 2012,” Dom says. Couples visiting the Prezola website register an account to start creating a wedding gift list. They can add items to the list and guests can purchase them directly on the site. Cash gifts and honeymoon funds can be added and there is a free standard delivery and bespoke gift-wrapping service. Six years on the business has overtaken the John Lewis gift list in popularity, has sold over 1 million gifts, has a turnover of £15 million and employs 50 staff. Its website offers 50,000 products by 500 premium brands such as The White Company and Jo Malone.

Quite a journey from the kitchen table

“The kitchen table is where it began and the first task was trying to find suppliers,” recalls Beaven. “That’s a challenge when all you have is a PowerPoint slide and you are going up against department stores such as John Lewis. “What we did was tell companies such as The White Company that because the department stores wedding lists were comprised of own brand products, that they were missing out on a lucrative market. “Our service was also better, we thought, as customers can take their time to compile their lists in comparison with a one hour long mad dash around a store. We told the brands that we could take on the market with this new model.”

Business strategy and a lot of bravado

“One of the tricks when talking to the suppliers at the start was to look and sound like you were a big, reliable and stable company, even though you were sitting in your kitchen!” says Beaven. “We took out full page display ads in Conde Nast’s Brides magazine and brought in some early PR support. “Some of it is smoke and mirrors but we had the fundamentals in place. We also found that the luxury brands were sensitive about their prices being shown online but we persuaded them through methods such as selective distribution agreements and promises to never discount.”

“Well, to pay for those early adverts we actually sold our beloved Land Rover. Later we sold our Georgian house to raise some cash to grow the business,” Beaven states. “We had looked for investment, but investors didn’t believe we had a strong enough track-record or traction. We had equity in the house so, even though it was unsettling, we decided to sell.” Talk of warehouses could make some people think of big box online retailers, but Prezola says it is targeting a different kind of customer. Its main demographic is upmarket couples in their early 30s. Not the type to get their wedding lists or ask their guests to buy from “Argos or Amazon”. Beaven adds: “We have personal shoppers to help couples find the right gifts for their lists and we do bespoke presents such as a hand-made ostrich feather floor lamp. But the main driver is that you have this extensive range of products to choose from rather than the more limited options you get at the department stores.” Prezola’s best-selling gifts are designer dinnerware sets by the likes of Sophie Conran, luxury ash wood professional knife blocks, Sonos wireless speakers with Amazon Alexa, and fluffy Egyptian cotton bath towels. Being successful involves adapting to changing tastes. Beaven says millennial couples tend to choose more experiential gifts than those of previous generations. It has also to adapt to changes in the calendar. “We are a seasonal business with our busiest sales period between April and October,” he explains. “It puts some pressure on cashflow because in the winter months when you are doing your development and marketing work the revenues are at their lowest. It is an extreme cashflow model, but it is just a case of managing the process.” Prezola has grown organically, but in 2016 it bought rival website gettingmarried.co.uk where couples create wedding websites for their big day. As part of the move, Beaven adds, website users can now fully integrate their Prezola gift list into their wedding website while guests can RSVP and buy a gift simultaneously. In 2017 came a £3 million investment from BGF which Beaven hopes will help Prezola expand its turnover to £50 million by 2021 and grow internationally. “It’s led to some very experienced and senior management coming into the business including a new finance, a new marketing director and former Amazon and Ebay operations director, David Kelly, installed as Chairman,” he explains. “It has helped us professionalise and will give us the finance to develop the UK business but also look at launching sites in the US, Ireland and Australia. We are looking to begin gettingmarried in these countries first, followed by Prezola.” Investing in its staff is also a priority including its existing apprenticeship scheme. “Some kids don’t want to go to University and so we offer them the chance to work for us. We have two to three apprentices in our head office and warehouse. Indeed, our warehouse manager started here as a summer gift wrapper,” Beaven says proudly. “Ali and I were both on YTS schemes in the late 1980s and look where we are now. More SMEs should concentrate on growing their own talent.” What a gift that would be to British business.