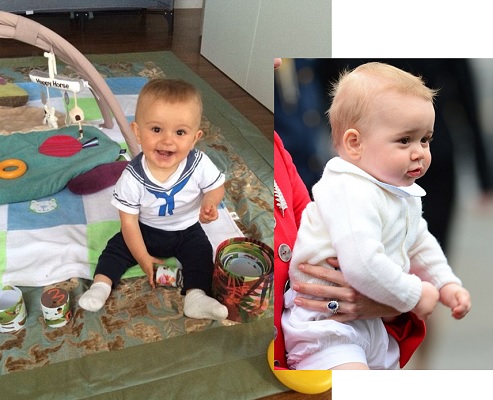 Best friends-cum-entrepreneurs Jonny Sitton and Daniel Price set up My1stYears.com back in January 2010, despite having no knowledge of the baby market at the time.

Fast-forward five years after launching the baby goods website and the university buddies expect a turnover of 6.5m in 2015 up from 1.35m in 2013; 3.2m in 2014 and Prince George is to thank for the results, which has prompted the company to look at expanding to the US.

After the royal baby was snapped with his parents in a blue jumper with his name on back in March 2014, the company sold 1,200 similar jumpers in four days after the family photo was released.

Over the past 12 months, sales have risen by 137 per cent and they’re expected to grow by 103 per cent in 2015 especially as Kate Middleton is expecting once again.

Read more on the royals in business:

Price, said: Its been a great 12 months for us. Weve benefitted hugely from the Prince George effect and the natural evolution of the brand has seen us explore new sales channels and introduce some exciting new products into the range.

Being a British baby gift company is a fantastic position to be in at the moment. With the second royal baby due in April, we look forward to seeing our sales and position within the market strengthening.

In addition to selling online, the company also has a contract with Selfridges and John Lewis to extend the product reach and brand awareness. Celebrities are said to be among fans of the products, including Kate Winslet, Elton John and Peter Andre.

The last six months saw a 350,000 warehouse investment and improvement of systems and the website to enhance the overall customer experience.

Price continued: As a company we dont want to stand still.  There are always going to be ways we can improve, whether thats introducing a new product collection, improving the warehouse operations or investing in the right team to help take the business forward.

Its also about looking for new opportunities. The soon to be royal tot will offer us a lot of opportunities, just a Prince George did, and theyre the ones we have to act on fast.

Theyll also help us reach out to new markets. Were really keen to sell worldwide, but that takes time, a lot of research, investment and very careful planning. We will be trialling online in the US during 2015 and hopeful that will be a springboard to help us retail globally.