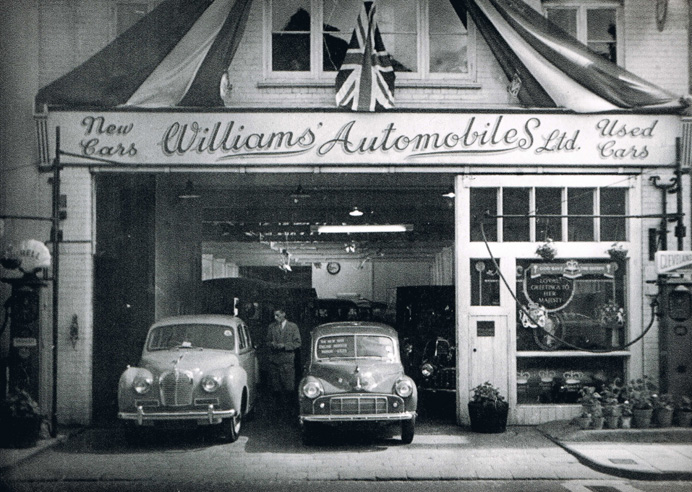 In the early 20th century Harry Williams, aged 11, kicked off his family’s entrepreneurial journey with a venture renting out blue goats to vicars.

Why? Church graveyards in Bristol had a problem with weeds springing up, so Williams provided goats which would go around eating the weeds. He would then take the goats away and clean up their mess, leaving the vicars with neat and tidy graveyards. They were painted blue to deter thieves, who would stand out like a sore thumb if found with the brightly-coloured animals. ?I think that’s about as entrepreneurial as you can get,? says his grandson Richard Williams. It was in the motor trade that the older Williams would find his fortune though. After a stint trading horses and carts, he realised there was real market potential for motorcars and in 1911 bought his first, a Belsize, before selling it for profit. In doing so he began a family business dynasty which has now lasted more than a century.  Despite the protests of friends and family who said they would never fully replace the horse and cart, he grabbed the bull by the horns and went on to make a success of trading cars. ?Within 15 years, from the backstreets of Bedminster with five kids in a two up, two down, he owned one of the best houses in Bristol thanks to dealing cars,? Richard Williams says.

It was all going swimmingly until the outbreak of the second world war, which saw the Government requisition his premises, forcing him to sell up all of his stock and close down operations. After the war the company needed to reinvent itself, and began successfully trading in army surplus before Harry’s son Cliff Williams took over the business. He took the business back down the consumer route, partnering with the British Motor Corporation (BMC), which was formed by the merger of the iconic Austin and Morris car brands. But BMC went on to become British Leyland, whose demise forced the Williams family to have another rethink. Richard Williams, by this point head of the company, began trading in Saabs, Skodas and Suzukis among others, to significant success. But as Saab began to struggle and the internet brought in new challenges, the company began to struggle. Richard’s son Henry, 29 and now the head of the business, says: ?We were a motor dealer, still a big family company with ?gin palace? sites in the centre of towns. But I’ve seen the world change over the last few years, it’s moved very quickly because of the internet.?

The company found that customers began to shop around more and instead of being concerned about customer service were increasingly using the internet to buy from larger companies, sometimes in cities far away from their homes. Without the buying power of a PLC, the company found customers were able to buy from larger retailers for a cheaper price than they could buy stock from the manufacturer. Another reinvention was needed. With Henry at the helm the company has completely reorientated from a chain of big showrooms selling mass-market cars to a boutique destination specialising in luxury Morgan cars. Henry literally built the premises, which sits on the edge of the Cotswolds, himself. ?With bespoke sports cars, you can offer fantastic customer service but the price point is less important,? says Henry. ? This way customers actually want to deal with you for your service and what you can provide them, rather than just because you’re the cheapest person on the internet.? The success of the turnaround led to Henry being named Young Entrepreneur of the Year at the FSB awards. Thanks to this shift in focus, customers now travel from all over the country and even internationally to visit the showroom, with some customers bringing their cars across from Europe just for a service. ?I might start doing what the Morgan factory does and start charging people for tours,? Henry jokes. International trade makes up more than 20 per cent of the business they do, with customers as far away as China and New Zealand coming to Williams Automobiles for expert guidance. Henry says that succeeding internationally hasn’t cost them a lot in marketing because their focus on customer service has helped them succeed through word of mouth.