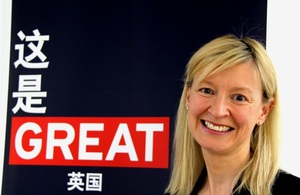 We spoke to Dr Catherine Raines, UKTI?s director-general for trade and investment, about what businesses need to consider before targeting the market. She says SMEs have a crucial role to play if the government?s to meet its export targets: ?Survey data shows that nearly one in five entrepreneurs aged 25-44 are trading with China already, even though it is seen as a very challenging market.?

China?s consumers are an obvious target market for UK producers and service providers because middle and high-income groups are demanding high quality imported household goods, clothing and food (the UKTI team in China is focused on developing high value trade opportunities). They are also spending more money on leisure, entertainment and overseas travel. Raines? highlights the success of UK food and soft drinks exports to the country, which increased by 82 per cent to ?201m in 2013, with pork and salmon alone contributing ?33m. The UK is also the leading foreign provider of financial services to China, although there are significant restrictions in terms of ownership limits and the scope of services that can be provided. Another top exports is vehicles, which made up 40 per cent of the goods we exported to China last year. This is partly because luxury car brands like Jaguar Land Rover and Rolls-Royce have gained traction. Although they might not be exporting the end product, this creates a huge supply chain opportunity for SME manufacturers that work with Tier 1 manufacturers back in the UK. While there?s huge growth in exports and several key sectors are performing well assessing the market opportunities is difficult, particularly for small businesses that lack language skills and resources. Raines says: ?It can be hard to find up-to-date and reliable business information to guide your business strategies and decisions in China. It is a huge market ? it is sometimes better to think of it as a collection of very big, very different regional markets ? and changing all the time. ?People tend to make more use of primary qualitative research, such as using in-depth interviews, because getting dependable information and insights from secondary and publicly available sources can often be more difficult than in Western markets.? It?s important to think about what part of the market you?re targeting; the country has more than 160 cities with over one million inhabitants. In 2002, 40 per cent of urban middle income groups lived in Beijing, Shanghai, Guangzhou or Shenzhen, but this will have fallen to 15 per cent by 2022. ?It?s increasingly important to think outside of China?s most famous coastal cities,? says Raines. ?China?s income distribution is slowly rebalancing towards the West and North, away from East and South China, and away from the first-tier and second-tier mega-cities to the medium sized and smaller cities.? The biggest issue to entering the market is regulations and bureaucracy. China has its own standards and compliance requirements and these can be different from EU regulations or other international standards. The cost effectiveness of China?s own manufacturing means UK companies can struggle if they have a product that already exists in the market at competitive rates, warns Raines:??It?s important to take the time to understand the market and what Chinese buyers and consumers really want. It is also important to build strong relationships in China ? ?guanxi? ? to help you overcome some of the challenges of doing business and to get good professional advice,? she says. Every country has its own set of quirks when it comes to business etiquette and China?s no different. The key to spend time building relationships and embrace the country?s ?let?s first become friends, then do business? attitude says Raines. ?Three-quarters of business deals are sealed outside of working hours. Social events can be as much part of the negotiating process as formal meetings. The distinction between verbal promises and written contracts is narrower than in the West. Contracts and court judgements are harder to enforce in China, so it is important to really know who you are getting into business with.? Another societal factor is Chinese people?s lack of willingness to give an opinion before their peers, which means they will hesitate before giving negative feedback about a proposal. All that means a good interpreter can be key to successful communication. UKTI?s trade services in China are delivered by the China Britain Business Council, which includes the Overseas Market Introduction Service. OMIS completes bespoke market research and analysis for UK companies interested in exporting to the market. This can include looking at issues such as market initiatives, the regulatory environment and the performance of a particular sector. UKTI and CBBC also help UK companies by finding new Business Opportunities throughout the year by publishing them online. These services can be used to identify local contacts, set up meeting programmes with agents, distributors, suppliers and potential partners, and UKTI and CBBC organise trade missions and various business matchmaking events throughout the year. ?Finding a local partner or distributor can cut the time and costs involved in entering the market, and give a company the benefit of local knowledge and networks? advises Raines. ?They can help with market information, track regulatory updates and respond to retailers on your behalf in a timely manner.?