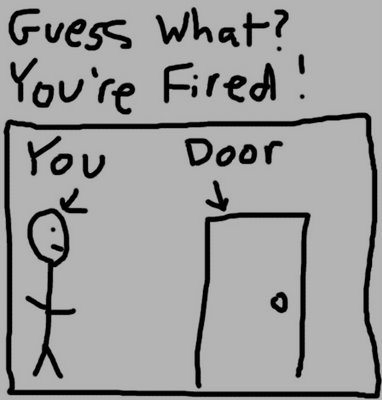 Share via
1. When you fire an employee, don?t forget the three magic steps There are three golden rules that you need to remember when firing employees. First, invite the employee to a meeting with you. Make sure they realise it?s a disciplinary meeting, not a chat about the weather. Second, let them have their say. Take notes and record how long it lasts so you can prove it wasn?t rushed. Third, ask a senor manager to review your initial decision ? you need an impartial opinion. If you fail to follow any of these steps, the dismissal is unfair and a tribunal has the power to inflate any award it makes to an employee by 50 per cent. 2. Have a heart-to-heart before you fire them ?Ignore advice from your HR department,? says John Timpson, chief executive of Timpson. ?Don?t mess around. Take the employee to one side and have an off-the-record, heart-to-heart chat. Quietly tell them it?s not working out. Give them some friendly advice and send them packing.” 3. Fire the employee and write out a cheque? ?Get your cheque book out and deal with it there and then,? says Peter Knight, Real Business columnist and founder of marketing firm Phoenix. ?Pay whatever it takes to avoid all that unnecessary waste of time with lawyers and then get them off the premises that day (after they?ve signed the proper documents). I don?t believe in beating myself up over hiring the wrong person, but I?m very self-critical of allowing the wrong person to stay and contaminate the rest of the team.? 4. ?but make it a big one. How can you calculate the sum? Mark Needham, founder of mobile computing company Widget UK says you should first work out how much the member of staff is owed in redundancy pay, back pay, etc; and then write out a cheque for substantially more than that amount. ?Tell them you?re paying them far more than you owe them, and the only thing you ask in return is that they sign a disclaimer saying they?ve been paid in full and will not sue you for anything in the future. ?A tricky-minded lawyer once pointed out to me that employees could claim they had accepted my cheque under duress and attempt to have a court overturn the disclaimer they signed. But in practice, most people will stick to their word, even if they regret it.? 5. Fire employees consistently Last year, you discovered that Duncan in sales had been colluding with a rival. You gave him a warning. A few months ago, you found out that Charlotte in sales was doing the same thing. You sacked her. Watch out: if you behave inconsistently, you won?t have a leg to stand on in court. 6. Take your time ? don?t rush into firing anyone Don?t ambush a member of staff with an allegation and fire them on the spot. Notice of a disciplinary hearing must be given at least 24 hours before the meeting. 7. Be wary of women Dismiss or demote a pregnant employee (or woman on maternity leave) at your own peril. ?A Scottish accountant was demoted from her job after returning from maternity leave. She took legal advice and was awarded more than ?20,000 in an out-of-court settlement,? warns Neeta Laing, head of employment law at Lewis Hymanson Small. Fall foul of the law and you face claims of sex discrimination. 8. ?and other minority groups. Regardless of length of service, it?s unlawful to dismiss an employee on these grounds: sex or marital status; colour; race; nationality or ethnic origins; physical or mental disability; sexual orientation; religion. 9. Keep count of how many you fire Making 20 or more employees redundant in any 90-day period triggers a statutory consultation obligation of at least 30 days. Catherine Gannon, employment specialist at Gannons Solicitors, reveals what happens if you forget this rule: ?A London business initially made 15 people redundant. Ten weeks later, five more people left when their fixed contracts expired. Legally, these counted as ?redundancies? and triggered the consultation obligation, which the employer breached. All of the 20 employees were entitled to claim up to 13 weeks? gross pay at the Employment Tribunal.? The lesson? Stagger the departures. 10. Record everything ?Entrepreneurs get into legal hot water by forgetting to record things like verbal warnings,? says Linda Narbeth, managing director of IT training firm Cherry Blue. ?Make employees sign a form that they?re aware of the action taken against them and agree that it?s fair.? Don?t let anything slip by undocumented. It will come back and bite you on the bum.