In the business community, we’ve been talking a lot about diversity, and how to promote it within the ‘white-male’ logged tech sector specifically.

But are top-down implementations the answer?

Perhaps, instead of offering guesswork on what the sector can do to encourage candidates from a more diverse background, shouldn’t we be looking at the facts, and what solutions they might propose?

Luckily for the tech sector, there are statistics to read and they come in the form of The Tech Talent Charter, (TTC).

It’s the first report of its kind, in that it has tracked the extent of gender diversity in tech companies across the UK. Let’s take a look at the findings:

What is the TTC?

According to it’s website, The Tech Talent Charter (TTC) is a commitment “by a series of organisations to a set of undertakings that aim to deliver greater diversity in the tech workforce of the UK.”

Signatories of the charter have to make a series of “pledges” to ensure they take a ‘gender-inclusive’ approach to the recruitment and retention of employees.

Although it started life as an employer-led initiative, in March 2017, the TTC was supported in the government’s policy paper on the UK Digital Strategy.

How did they gather the data?

Using data and statistics gathered from over 200 signatories representing over half a million employees, including a number of government departments, the TTC report works as a sort of snapshot of the UK tech industry as it stands.

The idea is that tech companies now have an insight into the systemic issues going on in the sector.

So, now that the ‘problem’ is exemplified in cold hard stats, perhaps companies can now go about devising strategies to overcome these issues going forward.

What’s interesting about the TTC’s results is that the tech firms that have committed themselves to the organisation’s shared terms have experienced a greater level of gender inclusion than other tech companies involved in the research.

This shows that UK tech companies should commit themselves to a uniform code of conduct that will help keep bosses motivated and alert about hitting diversity and inclusion objectives.

– Well, rhetoric and rules can be boring, but sometime’s it can help keep businesses focused and goal orientated.

When broken down into job roles, it’s clear that there are specialist areas within tech where women are less represented.

For example, ‘user-centred design’ had the highest proportion of women (48%), whilst the role of ‘Engineer and Programmer’ had the lowest proportion (15%).

There were no surprises here, as it is well known that the engineering sector specifically struggles to attract and female candidates.

The full job breakdown by %

Does the size of the company affect the amount of diversity within it?

The TTC’s associated micro-companies had the highest amount of gender representation with 53% of all technical roles being held by women. This was compared with the less impressive 20% found in small businesses,  23% in medium, and 19%, the lowest percentage, found in the largest tech companies.

“We are delighted to see our smaller companies challenging assumptions that they are too small or too busy to focus on diversity. This report clearly shows every size and type of company must become more inclusive and diverse.

The key is learning from each other. At our events across the country, our smaller companies are helping larger companies find ways of ‘thinking like a start-up’, to pilot smaller scale-approaches and then scaling them, rather than waiting to create the perfect solution and then trickle it down.” – Debbie Forster, CEO Tech Talent Charter

What tech companies should focus on in 2019

The report revealed that over half of the TTC’s signatories outsource all or some of their technology roles to a third party. This shows that tech companies need to keep gender-equality ‘best practices’ in mind when they are looking for candidates to fill these roles. It’s not simply an internal issue.

This year, the TTC is looking to work more closely with the outsourcing companies. They say there’s a responsibility for employers who are calling for diversity in their own teams to also be aware of the diversity within their supply chain and ask more from their outsourcing partners in terms of diversity-friendly approaches.

“One year on from the launch of the Tech Talent Charter, it’s encouraging to see that there’s real buy-in to improve the diversity of our workforce. However, with only one in five digital tech jobs nationally covered by women, there is more work to do to get the balance right.” – Margot James, Minister for Digital and the Creative Industries

What’s a tech SME to do?

So what can tech companies, large and small to do achieve gender parity in the workplace? They must see the gender issue as a branding issue too, and one, that if not properly addressed and fixed, will cause damage to their company and how it’s seen on the business stage.

The work must come from within the company itself, where senior staff must look at the levels of underrepresentation across their job roles, and recruit with these imbalances in mind.

However, work must also be done beyond the walls of the immediate company too, where, especially if they are outsourcing tech talent, to keep the ‘pro-gender-diversity’ brand in mind when choosing outsourcing partners and dealing with their supply chains.

“Diversity makes good business sense and it’s positive to see smaller companies leading the way. I now want more of our larger companies to sign up to the Charter and commit to getting more women into tech jobs.” –  Margot James 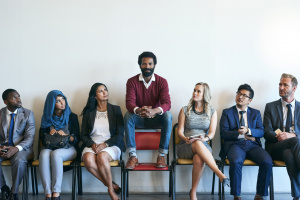 How to recruit and retain the best employees, whether they’re working in the UK or abroad