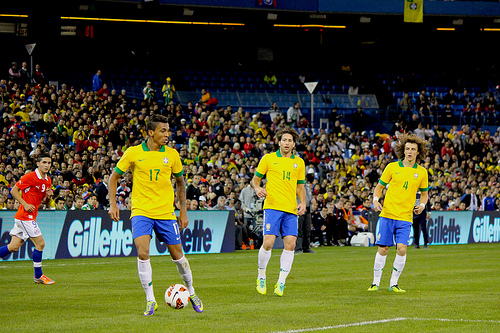 With the increased pressure on your bandwidth looming, is your corporate network match-fit and ready to survive the prestigious tournament?

With up to three games taking place per day in the month-long tournament in Brazil, office staff will be tuning into the action from South America via computers, tablets, phones and laptops during work hours all over the world. Games take place between 17:00 and 02:00 British Summer Time (BST), so workers will also be looking to watch catch-up on games they have missed overnight. Both ITV and BBC, via their respective players, will be offering live streaming and highlights packages. The amount of easily accessible content from the 2014 World Cup is great news for fans, but with higher than usual levels of streaming and downloading, corporate networks will suffer. This year’s tournament in Brazil is set to be the first World Cup in which fans will rely heavily on internet streaming to watch the matches. However, we can learn lessons from London 2012, which became the first Games during which viewers could steam the whole Olympics online. During that event, 34 per cent of the London 2012 audience watched the 17-day showpiece via the Internet. This number is set to escalate drastically for Brazil 2014 with an increase of devices in the workplaces and a desire to watch ‘catch up’ matches due to the time difference. The use of both iPlayer and ITV Player could account for the majority of content watched by employees, including when games are not being played. The BBC’s iPlayer recorded a peak of 7.8m global on ‘Super Saturday’ during the 2012 Olympics and proved that fans have an appetite for live and catch-up content. So is your network up to the challenge? Here are some top tips on how you can prepare for the big kick-off and avoid a World Cup upset.

Notify your team members on the effects streaming can have on your network. Most footy-mad employees will be understanding of the damage a sudden spike in traffic could cause. Offer them an alternative to streaming. Setting a TV up in the staff lounge, kitchen or even in the office itself, would deter live streaming.

You may already have rules in place that restrict streaming content. Make sure these rules are enforced, but also show leniency. If a middle ground can be found between your staff and yourself, this will help them understand your issue and will hopefully make them use the bandwidth responsibly and in moderation.

Use all the tools available

You probably already have technology to monitor your network available to you. By utilising this software you will be able to measure the use of your bandwidth and this will then allow you to take actions to control and balance the usage. If you notice that you are rapidly approaching your bandwidth limit, then go in search of the culprit. Without identifying where your usage is going, it is difficult to take the appropriate action. Stay vigilant, it could be easier than you think to catch them in the act.

After using your detective skills to track down the culprit, a yellow card and a reminder of company policy should do the trick. If it doesn’t, then you can again use the tools at your disposal. With the BBC and ITV steaming the games live via their websites, trying to decipher if a streaming site is being used for legitimate reasons can be difficult and blacklisting these sites could cause you problems. Whitelisting the applications that employees might be using to watch the content would mean that they have to have approval before they can use them. This would mean players, such as Windows Media Player, would need permission to run. This would put the power in your hands over the content your employees consume.

If taking the following steps hasn’t deterred certain members of your workforce, then it is time to get tough. Limit their access to sites that offer live streaming and catch-up downloads or cut them off completely. By following these top tips you should avoid a World Cup disaster for your corporate network. Taking steps to ensure your network is managed correctly throughout the tournament will mean the whole team can enjoy Brazil 2014. Ennio Carboni is Executive Vice President, Customer Solutions at Ipswitch. Image source