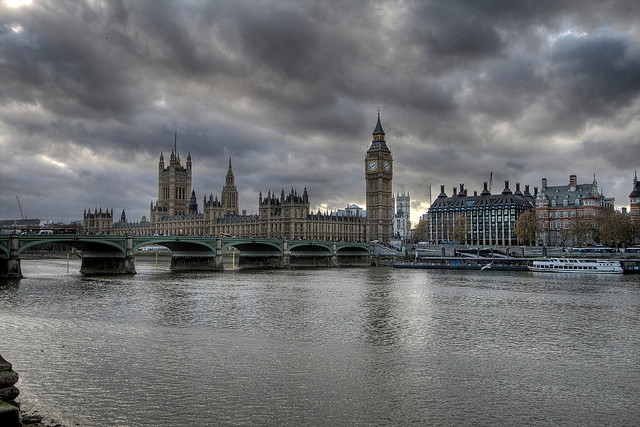 A good example has been the big swing to UKIP in the recent European elections. Despite UKIP appearing to be the mainstream party farthest to the right in UK politics, they are not the French National Front.

While there are probably some members who would feel at home in the BNP instead, it wouldn’t be fair to say that the British people have voted for the far right. Many will have voted UKIP as a protest to the major parties moving too far to the centre – both the right and the left tend to be wary of Europe, whilst the liberal centre, centre-right and centre-left tend to favour Europe. In many ways the political spectrum is more of a horseshoe shape than a straight line, bringing the far left and far right surprisingly close together. The recent shift in UK politics and in Europe to the more extreme ends of the political spectrum has created a certain amount of concern that office politics will suffer as well – that mixed nationality workforce’s will lead to more discrimination grievances, and that people will have to be more careful than ever about what they say.  The view on discussions about politics and political issues in the workplace varies from organisation to organisation. Many companies consider that political conversations at work can be helpful in building relationships among peers, as long as individual views are respected and the discussions are calm. Most of us like a lively debate (well, we do in our office anyway), but is it something for employers to worry about. Surely you can’t be had for discriminating against someone because they’re a member of UKIP or hold BNP views, can you?  Well, maybe you can. It’s worth bearing in mind that the philosophical belief protection provided under The Equality Act 2010 has expanded recently to include amongst others ecological beliefs and anti-hunting beliefs. Very recently (earlier this year) a tribunal accepted a claimant’s argument that a belief in “democratic socialism” could also constitute a philosophical belief. (Olivier v DWP). The decision is an employment tribunal decision and therefore not binding, but it is indicative of current judicial thinking so employers should approach political discussions in the workplace with as much care as they exercise when it comes to age, colour, gender, nationality etc. As the Scottish referendum approaches, this is likely to be another source of heated political debate. Passions are likely to rise as the referendum nears, and management would have to take sensible steps to calm hostility and remind both sides that they are there to work, not to campaign. It’s always wise to set standards to guide and manage workplace behaviour. Here are some tips to help you manage political diversity in the workplace. • Communicate your views on political discussions. Make sure that your rules are clear, understood and accepted so you can reduce the risk of disputes. Don’t allow political debate to disrupt your business. Limit such conversations to non-work time such as the lunch hour. • Even if they have opposing views, employees are expected to demonstrate courtesy and self-restraint. It’s OK to express your views (provided it’s done appropriately). Attacks (verbal or otherwise) aimed at a political candidate or party are not. • Make sure your managers know how to handle the situation if they see inappropriate discussions or conduct. This includes discussions that start up on social media websites too. If things go too far, use your discipline procedure to investigate and manage employees who overstep the mark. • Generally speaking the wearing or displaying of political paraphernalia in the workplace should be discouraged as it could have many negative implications. For example, if an employee has contact with customers you might want to introduce a policy that the wearing or displaying of all political items is unacceptable. No matter what business you’re in, it’s likely that there’ll be something in the way of political discussions between employees at one time or another. Your role as an employer is to allow the inclusion of all views and support diversity and enforcing policies fairly. Kate Russell is the MD of Russell HR Consulting  Image source