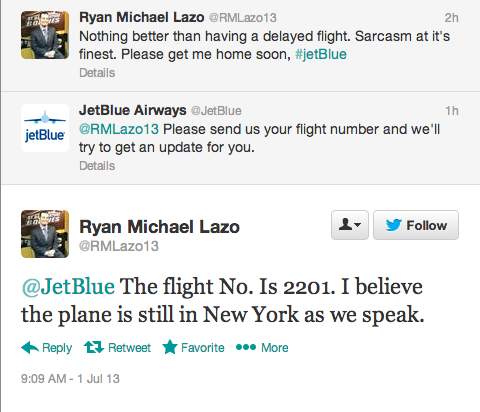 Why is Twitter so important Because when a customer is not happy, they instantly grab a phone and send a 140 character complaint letter into the internet for all to see. And with a Simply Measured study showing that 99 per cent of brands are on Twitter, businesses need to do whatever they can to make sure their reputation stays intact.

But here are three companies you could learn from.

Of course, JetBlue hits the top of the list. The fact that they are constantly acknowledged as being one of the best companies on Twitter means they’ve definitely got something going for them, and we’re not talking about the pictures or the conversation in general. No, it’s their responsiveness. The airline industry can get some hefty complaints, what, with all those delays and vocal passengers. So @JetBlue respond as quickly as possible to help calm down frustrated customers. But, unlike most of their competitors, JetBlue is known to be extremely quick when it comes to answering messages, whether they come from a private DM or the more public @. Indeed, remember that when it comes to Twitter, consumers expect quick responses to be the norm, so try to deliver. Most large firms have a dedicated social media team on site.

And what about having a distinctive customer service handle This not only makes it easier for you to find the complaints before they fuel a Twitter storm, but also gives consumers a direct outlet area. This will allow you to respond that much quicker, rather than weeding through all the tweets on your account. Just take a look at @NikeSupport. The amazing thing is how well their customer service is done considering how massive the company is. While Nike does have separate accounts for various things, @NikeSupport only focusses on one thing: customer support. And, perhaps unsurprisingly, they tweet a lot more than the actual Nike handle itself. This just comes to show that you need to make it easy for customers to find you. Sometimes, being simple is the best option rather than over-complicating things.

The whole point of social media is being there at the time of crisis,” said Ana Roca Castro, who runs consulting group Premier Social Media. everything is immediate. You can’t just do a press release and that’s the official opinion of the company. If you don’t have someone who is trained or with a clear policy, the company will chicken out. They don’t want to show a public face and risk a lawsuit. Such a crisis social media strategy was seen in 2010 when Graco had to recall 1.5m strollers due to concerns about uncovered hinges,which caused seven severe injuries to toddler’s fingers. But it seems Graco hit all the right notes. With a plan in place, they were already set to answer messages as soon as the announcement was made. Their twitter feed was filled with dates and times for distribution stroller-repair kits and made sure to answer all questions, even when it came to mothers asking whether their strollers would be part of the recall. In particular, it was noted and appreciated by mothers that they were so active and ready on Twitter because it’s definitely easier than getting on the phone and calling a number when you have kids running around and making noise in the background,” says Kate Marshland of ShoppingMama.com. They obviously thought of who their target audience was and how they could make it easier for them. However, those not involved in the recall saw how much of an effort the company was making and started tweeting about it. Remember, everything is public, so when you go all the way for your customers, everyone sees it. So make sure you keep the discussion open at all times! By Shan Schutte