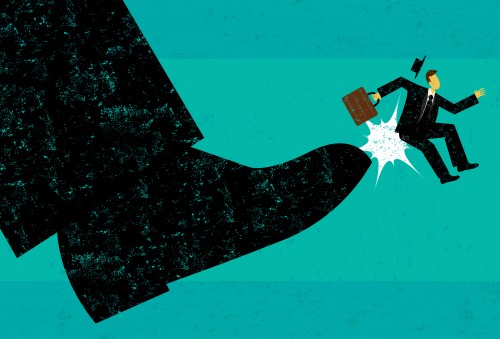 Talking to a friend the other evening, I was saddened to hear he’d been made redundant by his company after three years. A string of new business wins have taken his former employer off in a new direction, leaving his role surplus to requirements. It’s very upsetting, but something that happens all too frequently.

As an employer, making a team member redundant is one of the hardest things you will ever do. There’s no nice way to do it, so being honest and transparent is definitely the best way to approach it from the employer’s side of the table.  However if you’re on the receiving end – either personally “let go” or told “your company is no longer required” – it’s a huge blow. That said, career or business win setbacks like this are rarely terminal. So once we had digested the shock of my friend’s news, we started thinking of the positives that could be spun out of the situation and how many successful business people had at one time or another been sacked. Take Steve Jobs. The man who revolutionised the way we communicate, access the internet and made Apple a global superpower was once sacked by Apple, the company he helped set up. He was famously kicked out in 1985 because the board of Apple at the time believed the company needed to be more corporate. Jobs’ response was to go away and set up new companies including Pixar and return to Apple armed with additional experience to make it more successful than ever. Similarly, Walt Disney was told by a newspaper editor that he “lacked creativity”. Former chief executive of Hewlett Packard Carly Fiorina was forced to resign following the company’s acquisition of Compaq, while legendary inventor Thomas Edison was sacked by Western Union for conducting experiments in his office. Read more about firing staff or getting fired: All of these people said the same thing: “Getting fired was the best thing that ever happened to me.” How can you turn a set-back into success?

The first thing to do, post sacking, is to stop looking back and start looking forward. There is a new challenge out there and it’s waiting for you to grab it. Depending on the circumstances of the termination, there may be anger or bitterness. However, a change in mindset is needed to turn this situation to your advantage. Draw inspiration from the list of high achievers listed above and you may swiftly form the view that, like the best entrepreneurs, you need to take risks and suffer the occasional failure to reach the very top.

Failure is a great teacher and the lessons you can take from being shown the door will undoubtedly work to your advantage as your career progresses. Be honest with yourself about why the job was lost. Was it down to personalities or performance? Was it circumstances outside your control or could you have done things differently to change the outcome? In order to emerge stronger, take a close look at your performance in the job you’ve just left. Did you or company perform at its peak? Were you coasting? Might you have been out of your depth? Get all of this clear in your head, objectively and without apportioning blame, and you will be in a much stronger position in your next job.

When it comes to sitting down for your next job interview or business pitch, have a clear plan in mind for how you will deal with the question of your sacking. Any new employer or partner will want to know why you left your last job or a certain company is no longer on your roster. So even if you don’t use the word ‘fired’ you’ll need to be honest about what happened and how you’ve turned it to your advantage. People like to hear positive stories and by tackling such a subject head on, you will earn the respect of the person sitting opposite you.

The “ground zero” effect of losing a job makes it the perfect time to start afresh and rediscover your spark all over again. Like some of the greatest entrepreneurs have experienced, it could just be the best thing that ever happened to you or your company. This month Sir David Walker, former chairman of Barclays, has said that CEOs should be sacked after five or six years to prevent them becoming “untouchable and unaccountable”. Wise words, but how realistic is this? Ian Cowley is managing director at cartridgesave.co.uk.