After calling for a snap general election, prime minister Theresa May and her Conservative party was supposed to top the polls. She seems to be loosing ground by the minute though – an announcement that has traders fixed to their screens.

Traders, according to IG Markets’ analyst Joshua Mahony, were “typically poor judges of election outcomes”. This was based off data from 36,000 online traders spanning China’s market slowdown, the referendum vote and the election of Trump.

The roundup of information was used to predict how UK traders would react on 8 June, with Mahony suggesting there were always a few markets first in line.

IG Markets went into further detail: “Take those who traded on China, Brexit and Trump, for example. In every case, the top three indices were the Dow, the FTSE 100 and the DAX, and the top three currency pairs were GBP/USD, USD/JPY and EUR/USD.”

Due to this mad rush, Asian markets were often overlooked though. On the other hand, the most popular shares would likely be Tesco, Barclays and Lloyds – 30 per cent of all share trades were on the latter two when it came to Brexit.

Traders were also likely to take importers into account. While the Chinese slowdown had the least impact on UK traders, it led to the likes of Anglo-Swiss and Glencore ending up amongst the most-traded shares.

Things were likely get rowdy around 10pm, when polls closed, with 2am being peak time for trade volume. That’s were mobiles came into the mix. When it came to Brexit and the election of Trump, the majority of trading took place on mobile phones between 2am and 5am.

Adding further detail, Mahony claimed there was a shift “towards the aspirational (Brexit, Trump and Jeremy Corbyn) and away from a promise of the status quo (Remain, Hillary Clinton and May). It may be too little too late for Corbyn, but there is no doubt he is attempting to win over the population with promises of more free healthcare, free university, and NHS investment.

“However, as any economist will know, a budget is all about balance, and for every promise Corbyn makes there will be an anti-business policy which is far from welcome at a time when we need a more, not less competitive economy.” 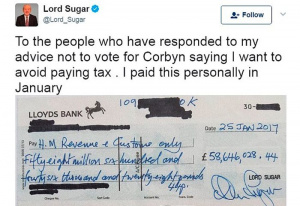