Both Sarah and James are investable people, but for very different reasons. James is young, hungry and ambitious, and despite his figures being insanely optimistic, it’s clear he will work hard to achieve his goals, and build the big business Lord Sugar is looking for. Sarah, on the other hand, probably has the best business acumen out of all this year’s candidates, so stands to reason she’d be named as one of The Apprentice 2017 winners. She’s sharp, calm and collected, she responds well in any given situation, she’s excellent at pitching and negotiation and, as Claude has said multiple times, she’s trustworthy. 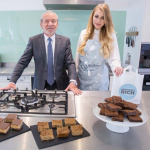 I still have to call him Lord Sugar, reveals The Apprentice winner Alana Spencer

Food entrepreneur Alana Spencer tells Real Business about the whirlwind six months she’s had since winning the 12th series of The Apprentice.

Both James and Sarah boast quantifiable experience in their fields. James is a proven recruiter, who said time and time again during the interviews stage that he knows his sector inside out. He may not have built a business before, but with proven industry experience, combined with guidance and advice from Lord Sugar, I am confident he will be successful. Sarah has been in business since 2009. She may not have been able to build a seven-figure firm during this time, but she knows her sector, she knows her margins and she knows what will or won’t generate profit. If you look back at previous winners, Lord Sugar has never chosen someone who isn’t experienced in their field. To build a successful business, you need to know your industry sector, and you need to know what does or doesn’t work. Sarah and James have both successfully demonstrated this, hence Lord Sugar’s decision for them as his Apprentice 2017 winners.

You win The Apprentice, secure Alan Sugar as a business partner and start scaling your firm – but what do you do with the money outside of the office?

As we know, this won’t be Lord Sugar’s first investment in either the recruitment or food industries. He has proven business success in Ricky Martin and Alana Spencer, who are both doing exceptionally well. Therefore, where onlookers may have perceived the double victory a risky move, Lord Sugar knows that both sectors have resulted in profitable businesses – and history has taught him that this is a very wise investment. That said, welcome to the winners’ circle, Sarah and James! Mark Wright is director of Climb Online and winner of The Apprentice 2014 – he’ll be back next week with lessons of the latest episode Image source: BBC

Entry to, and victory on, The Apprentice is tough as entrepreneurs battle for success. So why has 2015 winner Joseph Valente decided to fly solo? He explained his goals to Real Business during a Black Cab Entrepreneurs ride.