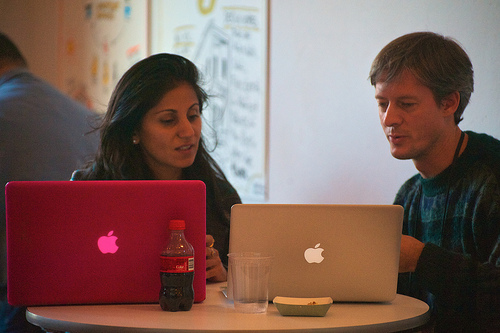 These converging platforms are considered to be one of the biggest disruptive trends, as trivial as changing society’s shopping habits and critical as changing government through popular revolutions. And as in real life, men and women differ in using social media and their mobile devices.

We’re already familiar with the disparity in words used by both sexes. We have a comprehensive collation of words used by men and women in their social networks, which, interestingly, showcases the f-word as one of the favorites in men’s comments and posts. Likewise, we’ve shown before in our previous infographic how women dominate men in social media.  Apparently, the gender difference revolves around three distinct areas: our personal and professional relationships, the need for information and entertainment, and consumer behavior. On that note, this infographic is takes a broader look at how men and women differ. There are distinct variances. For instance, men are more likely to use social media for business and dating, while women for relationships, sharing, entertainment, and self-help. Surprisingly, women ignore paid advertising more often than men. This makes sense because women are more conscious of their social circle and ads are intrusive strangers. Moreover, women seem to use their smartphones in more ways than men. Here’s a mini-shocker: women play games on smartphones ten per cent more often than men. In fact, women dominate men in almost all the top smartphone activities such as, visiting websites, downloading apps (surprise!), messaging, texting, and camera use.

How women and men use social media and mobile