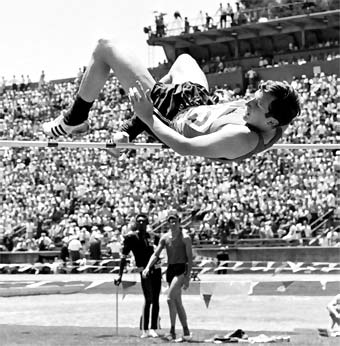 The conventional way to undertake a high jump until then was the straddle method (or western roll), where the athlete went over the high jump bar facing down. It involved a complex manoeuvre of lifting the legs individually over the bar. At high school Fosbury had found this approach difficult and had started to experiment with other ways of performing a high jump. He used a leap of the imagination and asked, “What if I turned around and went over with my back to the bar?”

Most schools and athletic clubs had a high jump landing pit made of wood chips and sawdust which is fine for the straddle jump but very dangerous if you try landing on your back. However, Fosbury’s high school in Medford, Oregon was one of the first in the country to use a foam landing pit. This enabled the student to try out his outlandish idea. Although his coaches tried to dissuade him Fosbury practised and developed his new method. He learnt to sprint diagonally towards the bar, then curve and leap backwards in a parabola. This gave him a lower centre of gravity than conventional jumpers.  He soon began to perform well and win competitions but many coaches and commentators derided his new approach. One newspaper labelled him the “World’s Laziest High Jumper” while another said he looked like “a fish flopping in a boat”. And so the term “Fosbury Flop” was coined.

After he won the Olympic gold medal everything changed. His new method became the standard for high jumpers everywhere. What insights as innovators can we gain from Dick Fosbury? (1) New technologies present great opportunities for innovations Timing is vital. The introduction of foam landing pits enabled a complete rethink of the high jump technique yet most athletes and coaches around the world were stuck in the traditional paradigm. It took a bold bound of imagination for Fosbury to realise that an innovative method was possible. (2) The more well-established the method, the greater the opportunity for innovation Whenever a system has been in place for a long time there is a good prospect of replacing or updating it with a fresh approach. Just because thousands or millions of people are doing it the conventional way does not mean that is the best way. (3) Try turning the whole thing around Lateral thinkers deliberately try to approach a problem from a different direction. Instead of facing the bar Fosbury turned his back to it. You cannot look in a new direction by staring harder in the same direction. You have to physically turn. As Fosbury did! Based on a chapter in “Think Like an Innovator” by Paul Sloane published by Pearson, priced £12.99. Sitting at home watching Usain Bolt saunter into a packed stadium then sprint the 100 metres in super-human time, it’s easy to feel an Olympic athlete is worlds apart from those of us who sit behind a desk running a business. However, there are a number of similarities that business leaders can learn from, particularly in regards to the Rio games.